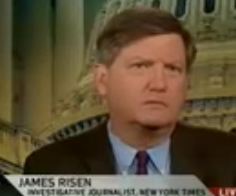 New York Times reporter James Risen has “filed a 22-page affidavit” alleging the U.S. government has harassed and spied on him to find out who his sources are, Yahoo News reported.

Risen claimed “The Bush administration eventually singled me out as a target for political harassment.”  The affidavit also alleges that administration ” was embarrassed by the leaks that wound up in the New York Times” and Risen’s 2006 book The State of War.

iMediaEthics wrote in January when Sterling was indicted. According to Yahoo News, U.S. prosecutors claim former CIA agent Jeffrey Sterling was one of the sources for Risen’s book and they want Risen to testify in a criminal trial charging Sterling “with leaking classified information.”

Reporters Committee for Freedom of the Press reported that Risen file a motion calling for the dismissal of “a government-issued subpoena for his testimony” in Sterling’s case.