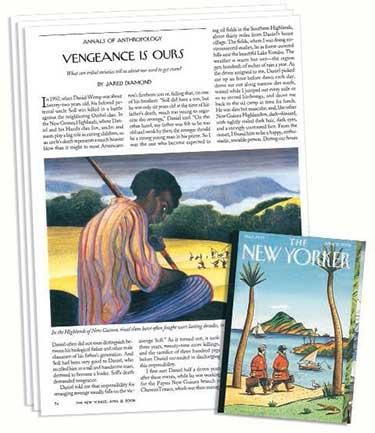 Wemp was the main source and character in Jared Diamond’s New Yorker article, “Vengeance is Ours,” in which Diamond depicted Papua New Guinean Wemp and his co-plaintiff Isum Mandingo, as murderers. Previously, Wemp — who claims that because of Diamond’s story, he cannot return to his PNG highlands village — and Mandingo sought $10 million in damages from Diamond and Advance Publications Inc., The New Yorker‘s publisher, both of whom were named as co-defendants on the suit.

In September, 2009, following their original suit filed in April, 2009, Wemp and Mandingo served Diamond and Advance Publications with an amended complaint (as opposed to filing through the court system). When attorneys for the defendants filed an answer with the New York State Supreme Court last Wednesday October 14, 2009, Litman (a highly acclaimed criminal trial lawyer whose clients have included Robert Chambers) proceeded by filing the amended compliant with the Court on Friday, October 16, 2009.

According to Forbes magazine, Wemp and Mandingo’s 30-page amended suit details what they claim to be false and inaccurate information in Diamond’s story. “The latest filing identifies 24 separate passages in the story Wemp and Mandingo say are bunk. For example: Diamond’s account says 30 people lost their lives during a three-year clan war that began after a pig ransacked someone’s garden. The complaint says only four people died, the war lasted three months and the conflict didn’t start over a pig in a garden, but an argument over a card game. The filing claims Wemp wasn’t even a participant in the clan war: ‘At the time of the fighting, Wemp was working some 200 miles away at the coast, in a city called Madang.’

Paragraph 7 of Wemp and Mandingo’s amended complaint is the section that includes excepts from Diamond’s article along with Wemp and Mandingo’s rebuttal claims. For instance, in The New Yorker article Diamond wrote that Wemp said, “Only one arrow hit Isum, but it was a bamboo arrow, flat and sharp as a knife, and it cut his spinal cord.  That’s even better than killing him, because he’s now still alive today, eleven years later, paralyzed in a wheelchair, and maybe he’ll live for another ten years.” In their amended complaint, the plaintiffs state, “Daniel [Wemp] does not know how Isum was injured. Isum did not have his spinal cord cut, but was shot in the side of his neck. Isum was never in a wheelchair, much less 11 years after the event. Daniel never told Diamond that paralyzing Isum was even better than killing him or any of the other words attributed to Daniel in this paragraph.”

Diamond and Advance Publications have denied all charges. As reported by Michael Balter on the Science magazine blog, Science Insider, “The defendants’ attorneys listed 34 reasons, called ‘affirmative defenses,’ why they should prevail in the lawsuit. Among them are the contentions that the plaintiffs were not defamed and had not suffered any harm or actual injury to their reputations; that Diamond and The New Yorker had not acted with “actual malice” or with knowledge that The New Yorker story was false; that the article was “substantially true” and thus protected under the First and 14th Amendments to the U.S. Constitution; and that to the extent to which the plaintiffs did suffer any harm or damages, ‘it is the result of their own actions.'”

Balter is the only reporter to have gotten responses from Diamond and The New Yorker, which were included in his May 15, 2009 Science magazine article titled “Vengeance’ Bites Back At Jared Diamond.” In that article, The New Yorker’s editor in chief, David Remnick, told Balter that his fact-checking staff had been unable to locate Wemp before the article went to print. But Remnick defended the magazine’s integrity, explaining that, “we had Jared Diamond’s meticulous, detailed notes from the 2006 interview” — Diamond allegedly took no notes during conversations he had with Wemp in 2001-2002 when Wemp was his driver for an ornithological survey in PNG — “and we consulted with people with expertise in the Southern Highlands, who confirmed that Daniel Wemp’s description of the revenge battle was consistent with known practice.”

As the suit proceeds we will continue to provide updates. For more details about iMediaEthics’ investigative work on Diamond’s story, visit the exclusive report, “Jared Diamond’s Factual Collapse.” Also, “The Pig in a Garden: Jared Diamond and The New Yorker” essay series “written by ethics scholars in the fields of anthropology and communications, as well as journalists, environmental scientists, archaeologists, anthropologists and linguists, et al.” Go to The Pig in a Garden Series Index.

Additional coverage of the amended suit can be read at Gawker.

UPDATE:10/26/09: 6:00pm: The Science magazine blog, Science Insider, posted another article on the lawsuit. The earlier post (cited above) detailed the defendants’, Diamond and Advance Publications, Inc., answer to Wemp and Mandingo’s lawsuit. This new post details the amended complaint filed by Wemp and Mandingo, which includes comparisons of Diamond’s text alongside the plaintiffs’ alternative claims, and includes a link to the iMediaEthics pdf of the plaintiffs’ amended complaint.