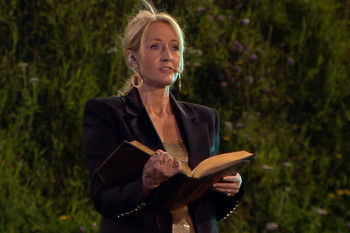 Rowling at the London 2012 Olympics. (Credit: Courtesy of JKRowling.com)

The UK Daily Mail has agreed to publish a correction and apology to Harry Potter author JK Rowling following her libel lawsuit.

As iMediaEthics previously reported, Rowling filed a libel lawsuit following the Mail’s 2013 report that suggested her past as a single mother was a “sob story” and claimed “churchgoers who cared for her” were “upset” by her.

Rowling claimed that the Mail misrepresented her first-person article on UK charity Gingerbread about being a single mother.

According to the UK Press Gazette, on Jan. 21, the Daily Mail issued an “offer of amends” to Rowling under which the Mail promised the correction and apology.

The Mail and Rowling’s lawyers haven’t agreed on a financial settlement or exactly what the correction would say. UK judge Jutsice Tugendhat said this week that if the two can’t agree then he will make a decision, according to the Press Gazette. He also said Rowling’s lawyers could comment publicly about the lawsuit because, “the resolution of the claimant’s complaint, which was eventually admitted to be well founded, has taken far too long already.”