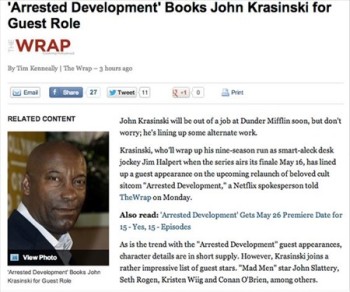 Gawker, which posted a screenshot of the photo fail, described the error quite succinctly:

“In lieu of a photo of Krasinski—a 33-year-old Caucasian native of Newton, Massachusetts—Yahoo somehow managed to use a pic of John Singleton, the 45-year-old African American film director and favorite son of South L.A.”

The story now shows a picture of the actual John Krasinski, but there’s no disclosure of having erred.