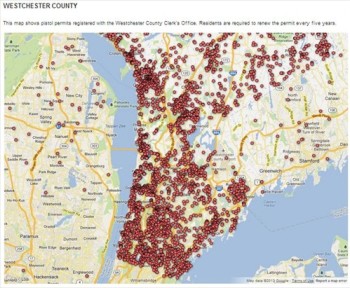 See above the gun database. Now, the Journal News only shows dots for where gun permit holders are. The paper has taken down the identifying information like name and address. (Credit: LoHud.com, screenshot)

The Journal News’ may be making face-saving excuses about why it took down identifications of gun permit holders but its actions are clear.  The New York newspaper’s controversial gun map now shows a bunch of almost meaningless dots but no names of who owns guns and where they live.

As iMediaEthics has written, in late December, daily newspaper the White Plains, New York Journal News published a gun permit database that it said was created through the Freedom of Information, to much criticism.  Despite claims of invasion of privacy and more, the newspaper defended its publication as relevant in light of the December Sandy Hook, Connecticut school shootings.  Shortly after the newspaper’s database went live, a blogger named Christopher Fountain then turned the tables on the newspaper and started publishing the identifying information of newspaper staffers. Because of its controversial database, The Journal News reported receiving threats and hired “armed security personnel.”

According to the New York Times, the Journal News‘ publisher Janet Hasson issued a statement Jan. 18 linking the decision to unpublish that information to a new New York law.  That law, the NY SAFE Act, includes the following “provision,” the Associated Press reported:

“Limit the state records law to protect handgun owners from being identified publicly. The provision would allow a handgun permit holder a means to maintain privacy under the Freedom of Information law.”

The Times pointed to Hasson’s statement on the Journal News‘ website, in which she continued to defend the Journal News‘ reporting and denied the decision to take down the information had anything to do with criticism of the newspaper. She wrote:

“Our decision to do so is not a concession to critics that no value was served by the posting of the map in the first place. On the contrary, we’ve heard from too many grateful community members to consider our decision to post information contained in the public record to have been a mistake. Nor is our decision made because we were intimidated by those who threatened the safety of our staffers. We know our business is a controversial one, and we do not cower.

“But the database has been public for 27 days and we believe those who wanted to view it have done so already. As well, with the passage of time, the data will become outdated and inaccurate.”

In response to the Journal News‘ decision, New York State Sen. Greg Ball reportedly commented:  “Thank God The Journal News has finally realized the error in their judgment and done the right thing. … I am proud to have passed legislation keeping The Journal News from doing this ever again.”