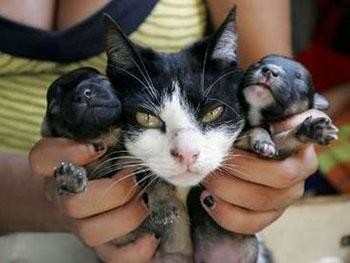 Extra, extra, South American cat gives birth to puppies! That, at least, was the story being peddled last month—not on the sordid pages of the National Enquirer or The Sun, but by the eminent news service, Reuters.

The report came out of the southern Brazilian town of Passo Fundo where 18-year-old Cassia Aparecida de Souza’s pet cat Mimi reportedly mated with a stray mutt known locally as “Dog”. The tryst, according to de Souza, resulted in Mimi’s giving birth to a mixed litter of kittens and—ahem—puppies.

According to the story, Mimi’s kittens did not survive but the puppies did. The mixed-species litter attracted the attention of local Brazilian newspapers and the skepticism of local biologist Adil Pacheco. After the story began to seep into the national media, Reuters picked up the report.

But did Reuters’ editors feel that this story was in line with the company’s famous “Trust Principles,” which ensure “integrity, independence and freedom from bias”?

I called Reuters to speak with someone who could comment on these editorial decisions. I spoke with Sam Topping, a media rep, who, understandably, knew little about the specifics of the reporting. Reuters after all is a huge outlet, churning out loads of wire reports, financial data and business analysis. Its news agency comprises 2,300 editorial staff in 130 countries. According to its web page, Reuters’ reporters and photographers filed two-and-a-half million news items in 2004 alone. In this massive tide of information it seems plausible that some items Reuters passes off as news are a little less than that.

Topping looked in her database and could not find the name of the writer who filed the story. “Maybe it’s a stringer,” she said and offered to put me in touch with someone who might know who this writer was. (That was a week ago. I still have not heard back.) I said that would be helpful and asked what kind of fact checking and vetting is done on international dispatches like these. She seemed confused at the question and replied, “These kinds of stories run all the time in our ‘Oddly Enough’section.”

The implication was that bizarreness is this section’s key criterion.

However, “bogus” is a more apt term for this story. In terms of structure, the story relies on uneven sourcing to achieve its suspense. Adil Pacheco, who appears as the lone voice of science, applied a no-nonsense logic to the problem: “It’s rather simple really,” he said. “If the puppies prove to have 78 chromosomes, they are dogs. If they have 38, they are cats.” Nonetheless, under pressure from local news outlets (and in spite of his assertion that “every characteristic about them is canine”) Pacheco agreed to perform a genetic test to settle the “mystery.”

A quick call to a local veterinarian would have been just as fruitful. Admittedly, the question I had for Natalia Santos, a veterinarian and researcher at Cornell University, made me a little squeamish: is it physically possible for a dog to have sex with and impregnate a cat?

While Santos said it was not physically impossible for a small dog to mount a cat, it is impossible for a dog to get a cat pregnant. Turns out that penis shape is critical in cat reproduction. “Cats are induced ovulators, meaning that intercourse is required to cause ovulation. The cat penis has very specialized ‘spiny’ structures that cause the egg to be released,” Santos explained. “There is no way that the dog penis could cause that to happen.”

I pressed the issue and asked her to consider the more-remote-than remote possibility in which dog sperm were able to reach the cat ovum. She said fertilization would still be impossible because of the vast genetic differences between cat and dog. “In fertilization, the number of chromosomes carried by the sperm must match closely with those contained in the egg,” said Santos. “They are not even close in the dog and cat.”

What about horses and donkeys, I asked? They are not the same species but still manage to mate and give birth to that stubborn, sub-exotic hybrid we all know as the mule. Santos quickly pointed out that both horses and donkeys are members of the Equidae family, and are genetically very similar. Similar enough to produce offspring, yes; but dissimilar enough that mules are invariably born sterile.

Cats and dogs, however, share a far more distant evolutionary relationship than horses and donkeys. While the common ancestor of horses and donkeys lived an estimated 3-5 million years ago, the common meat-eating ancestor of cats and dogs (and all living species of carnivore, for that matter) lived 50 million years ago. This “evolutionary distance” means that cat and dog DNA have diverged to a point far beyond reproductive compatibility.

Another common sense tip off about the flakiness of this story is the lack of documented cases of cat-dog hybrids in the public record. A quick Google search of “cat-dog hybrids” brings you immediately to a page about mythological creatures—the cameleopard, the chupacabras, the griffin and the centaur, for example—that have punctuated folklore through recorded history. A LexisNexis search (pre-November 16, 2006) of the same term brings up two articles, one of which discusses Sir Walter Raleigh’s assertion in his 1614 History of the World that hyenas were left off Noah’s Ark because they were mistakenly thought to be, get this, cat-dog hybrids.

In spite of these layers of improbability, Reuters ran the story. And, like any “reliable” news source, they followed up. Two days later, the news agency reported that blood tests refuted de Souza’s claim. Mimi’s offspring were, indeed, puppies and, moreover, genetically unrelated to her. Pacheco’s original hypothesis, that Mimi had taken in a litter of stray pups to care for—a widely documented phenomenon—was vindicated.

But the damage was done. Once on the wires, the story became a small, international sensation. It ran in the oddities section in the New York Post and became a topic of earnest discussion on ABC’s Good Morning America. Worst of all, perhaps, De Souza, an expectant teenage mother, was cast by members of the Brazilian press as a huckster, peddling a hoax for profit.

But is the incident at Passo Fundo the regrettable but unavoidable cost of an aggressive press? Or was there something other than accuracy pushing Reuters to circulate this story? To get a journalists’ perspective, I made a few more calls.

According to Bob Steele, a media ethics expert at the Poynter Institute, journalists must think critically about the topics on which they are reporting and should approach all oddity stories with “rational skepticism.” Though Steele would not comment on this particular story, in general, he said news outlets are obligated to “ensure that stories conform to standards of accuracy, comprehensiveness and balance.”

In scientific and technical fields, the task of distinguishing the plausible from the bogus is admittedly more difficult. But according to Steele, this is no excuse. It means that journalists must first pick up a telephone—or in this case a primer on reproductive biology—to confirm basic facts before moving forward on a story.

Steele also pointed out that “odds and ends” stories are often the most popular stories on news websites, where mouse-clicks equate to advertising dollars. He cited a grisly and hugely popular story in the Florida press about a woman who had gone missing and was found, weeks later, trapped behind a bookcase in her home. “We don’t have to look very far to find these stories,” Steele said. “The risk, however, is that the story will carry a weight that it doesn’t deserve.”

The consequences of peddling oddities may have a cumulative, negative impact on a publication’s credibility. “Oddities and titillating stories can attract readers but seriously diminish the impact of the rest of what you’re doing,” said Steele.

But once the story is out there can a news outlet afford not to cover it? Michael Pollan, writer and journalism professor at the University of California Berkeley, said that oddity stories can generate hard to avoid buzz. But he said news outlets should resist the impulse to cover them until the facts check out.

Pollan was less than receptive to the idea that buzz alone equates to news. “The sociological angle, [the idea] that everyone else covered it, now it’s a phenomenon, is the traditional cop-out way to get nonsense into the papers,” he wrote in an email. “[It’s the] same as printing rumors from the tabloids.”