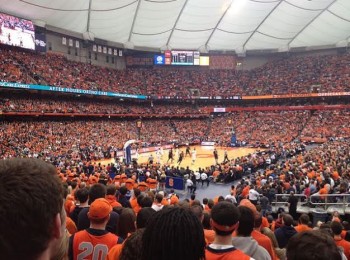 Syracuse University plays all of their basketball home games in the Carrier Dome (Credit: Shoobs056 via Wikipedia)

A U.S. District Judge ruled this week that Laurie Fine can continue her libel lawsuit against ESPN, Syracuse.com reported

Fine is the wife of Bernie Fine, who was fired as Syracuse University assistant basketball coach in 2011 following accusations of molestation against him. The New York Times reported at the time of his firing that the firing announcement came after “news that a third accuser had spoken to the police.” Fine was not charged over the accusations because of statute of limitations laws, the Times reported. Bernie Fine denies the accusations

Laurie Fine sued ESPN in May 2012 for libel, listing numerous points in ESPN’s reporting where she contends ESPN made false claims about her, as iMediaEthics reported at the time.

ESPN had asked for her lawsuit to be dismissed. The network argued that it had based its reporting on “official proceedings, such as Syracuse Police Department documents and a federal search warrant application, and Laurie Fine’s own words in an audio recording,” according to Syracuse.com.

However, the judge, Judge Lawrence Kahn, decided that ESPN’s reported “descriptions” of Fine were by ESPN, and not written or said by ESPN’s sources. Further, the judge said he didn’t know if the ESPN stories were “fair and true,” according to the Associated Press.

Laurie Fine’s lawyer, Lawrence Fisher, said of the lawsuit against ESPN, “we’re going to hold them accountable,” Syracuse.com reported. He added to Syracuse Univ. independent student newspaper the Daily Orange that Fine is “extremely happy” with the ruling.

ESPN spokesperson Josh Krulewitz told iMediaEthics by e-mail, “We stand by our reporting.”

Fine’s lawyer, Fisher, pointed iMediaEthics to the comments he made to the AP and other news outlets, cited above.

In July 2013, Bernie Fine dropped his own libel lawsuit against ESPN, as iMediaEthics wrote at the time. However, he maintained that “his legal claim has merit,” according to a statement his lawyers sent iMediaEthics.