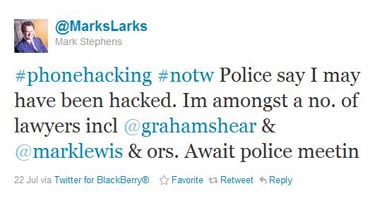 Attorney Mark Stephens tweeted that his phone may have been hacked. (Credit: Twitter, screenshot)

Mark Stephens, a former attorney for WikiLeaks’ Julian Assange, has indicated he may have had his phone hacked by News of the World, CBS News reported.

Stephens is “awaiting a police meeting.”  According to CBS News, Stephens reportedly told UK TV news station Channel 4 that he asked Scotland Yard “if his phone had been targeted” and was told yes.

In mid-July, Assange fought an order extraditing him to Sweden.  Stephens had served as a legal representative for Assange until that hearing, in which he and attorney Geoffrey Robertson were replaced by Gareth Peirce and Ben Emmerson.

The appeals hearing was July 12 and 13 and was overshadowed by the News of the World scandal.  The judge hasn’t issued a ruling, but as iMediaEthics has previously noted, even that ruling may be appealed to the UK Supreme Court.

The Telegraph reported that Assange’s lawyer Ben Emmerson commented that Assange “may be said to have ‘pushed the boundaries’ during sexual encounters with the women,” but maintained the defense that the woman consented.

WikiLeaks = News of the World?

“In both cases, secret information, initially obtained by illegal means, was disseminated publicly by news organizations that believed the value of the information superseded the letter of the law, as well as the personal interests of those whom it would most directly affect.

“In both cases, fundamental questions about the lengths to which a news organization should go in pursuit of a scoop have been raised. In both cases, a dreadful human toll has been exacted. “

However, Stephens questioned the varied reaction to the two issues:  WikiLeaks’ Julian Assange is sometimes praised, but News of the World’s scandal has led to arrests and investigations.  “The easy answer is that the news revealed by WikiLeaks was in the public interest, whereas what was disclosed by News of the World was merely of interest to the public,” Stephens commented.

He denied that he is “shilling for Rupert Murdoch,” the owner of the Wall Street Journal.  Stephens claimed he has “nothing but contempt for the hack journalism practiced by some of the Murdoch titles.”

CNN reported that the FBI has arrested 14 people allegedly associated with the hacking group Anonymous. The charges “related to their alleged involvement in a cyberattack on PayPal’s website.”

Anonymous recently claimed that it hacked NATO’s servers and have “1 gigabyte of sensitive information,” the Pittsburgh Post-Gazette reported.

Meanwhile, hacking group members reportedly have countered the attacks in a letter stating that “You can’t arrest an idea,” PC World reported.

Full disclosure: Mark Stephens did legal work for iMediaEthics’ publisher Rhonda Roland Shearer in the past.