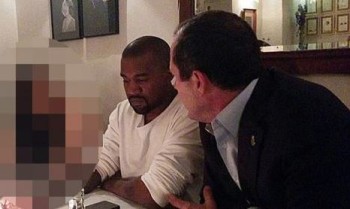 The photos showed Kardashian, her husband Kanye West and Jerusalem mayor Nik Barkat. Kardashian and West were in Jerusalem to baptize their daughter North West. The site also didn’t publish her name. This is the Kikar HaShabbat story.

The first photo, below, Photoshopped a receipt over Kardashian.

The second photo blurred out Kardashian.

Below see the original photo via the mayor’s Twitter.

Joined @KimKardashian and @kanyewest in #Jerusalem to toast and celebrate hosting them in our beautiful city pic.twitter.com/RX4PKx3E4J

Haaretz added, “Even her name was not published in the newspaper – she was referred to only as “singer Kanye West’s wife” – all in the name of extreme modesty.”

The site’s coverage wasn’t of the celebrity visit but rather that the mayor was at a restaurant that serves non-kosher food, Haaretz pointed out. Kikar HaShabbat‘s story is titled:  “Barkat hosts famous couple in a restaurant that serves ‘treif.'” It criticized the mayor for his “insensitivity to the majority of city-dwellers who keep kosher,” the Sydney Morning Herald reported.

Kikar HaShabbat editor Nissim Ben Haim told the AP Kardashian is a “pornographic symbol” to have to be removed from the photos because of the site is ultra-Orthodox.

“Within the insular Ultra-Orthodox community, pictures of women often aren’t shown out of modesty,” the Associated Press noted.

iMediaEthics is writing to Kikar HaShabbat.

Earlier this year, Israeli newspaper Hamevaser doctored Angela Merkel and two other women from the march in Paris after the attacks on Charlie Hebdo magazine.

In 2011, two Hasidic outlets Photoshopped then-Secretary of State Hillary Clinton and Director of Counterterrorism Audrey Tomason from a photo of the Situation Room during the attack on Osama bin Laden, as iMediaEthics wrote at the time.

In 2012, Jewish site Behadrei Haredim placed gray boxes over the chests of female journalists in a news video from New York City’s WABC-7.