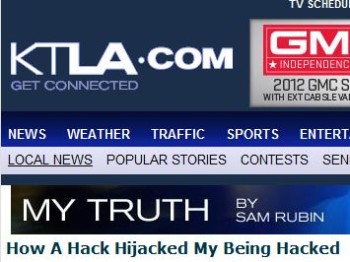 KTLA's Sam Rubin blogged about Gawker's post reporting that he had tweeted the n- word and questioned Rubin's claim of being hacked. Rubin criticized Gawker in his blogpost. (Credit: KTLA, screenshot)

Gawker had questioned Rubin’s claim of being hacked, writing that “this story still doesn’t make a lot of sense” because another tweet seemingly “acknowledging some culpability” was posted but not deleted.

But Rubin countered Gawker’s report, e-mailing the author to say the “story is completely incorrect.” Rubin also blogged about the Gawker blog post with a July 7 story, “How a Hack Hijacked my Being Hacked,” that called the Gawker story “lightly researched and incredible inaccurate.” Rubin noted that he “apologized because I clearly felt badly that any kind of racist statement would be associated with me.”

Gawker has since “updated” its original story to note Rubin’s blog post about the hacking and criticism of Gawker.