Kosovo Bill to Jail Journos for Libel Axed by Prez 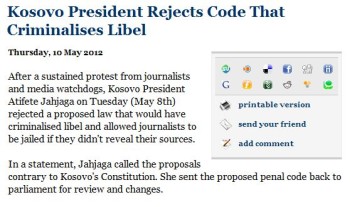 Kosovo’s president “rejected  a proposed law that would have criminalised libel and allowed journalists to be jailed if they didn’t reveal their sources” in libel cases, Turkish Weekly reported.

Under the proposed law, journalists could have been jailed for “at least three years” in libel cases.  Turkish Weekly noted that journalists and journalists groups “boycotted” and protested the law.  Human Rights Watch also called for the bill to be changed, with a researcher from the group, Lydia Gall, saying “These provisions unjustifiably interfere with journalists and undermine media freedom in Kosovo.”

Human Rights Watch noted that if libel was criminalized and journalists had to identify sources, it could “discourage…investigative reporting on sensitive issues.”

Kosovo Bill to Jail Journos for Libel Axed by Prez