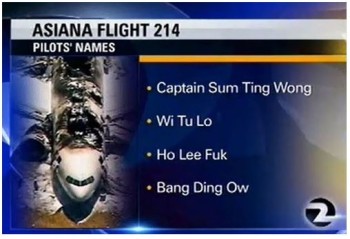 A screenshot of KTVU's July 12 error.

Bay Area Fox-affiliate KTVU fired three producers who were involved in its July 12 viral mistake in reporting racist and offensive names as those of the pilots in the Asiana Flight 214 plane crash at San Francisco’s airport, SFGate reported.

The station had wrongly reported the pilots were Captain Sum Ting Wong, Wi Tu Lo, Ho Lee Fuk and Bang Ding Ow. As iMediaEthics reported, KTVU issued numerous apologies for the fact check fail. In a twist, KTVU said that it had confirmed the names with the National Transportation Safety Board before publication, but the NTSB later admitted that a summer intern was responsible for the bogus fact check.

Within days of the on-air error, Asiana Airlines said it was planning to sue over the “demeaning report,” but on July 17, the South Korea-based airline said it opted against legal action.

According to SFGate’s July 24 story, which credited “Rich Lieberman’s 415 Media blog” for breaking the story of the firings, the three fired producers are:

“I would LOVE to talk an answer all questions. but my lawyers have forbidden me to talk about this. i do appreciate your seeking the highest & best source. good reporting is an endangered species.”

We’ll update with any response from Gastelu.

SFGate added that noon news producer Elvin Sledge is also leaving the station but “for health reasons.” According to Lieberman, Sledge reportedly put in for retirement “weeks ago” further suggesting the decision wasn’t related to the Asiana pilots error.

According to SFGate’s anonymous sources, KTVU got the bogus names “via e-mail from an expert source who had provided information to the station in the past.”

iMediaEthics asked KTVU’s Raponi for confirmation on the firing of the three and the retirement of Sledge being unrelated. We also asked where the station got the fake names from and what its investigation into the incident included. Raponi told iMediaEthics by email:

“It is KTVU’s policy not to comment on any personnel issues. We do not have any further comments beyond our original statement that was issued July 12.”

Videos of Error being taken Down

KTVU has been trying to get YouTube videos of the error taken down by filing copyright claims, Wired reported earlier this week.

According to Wired, “some of the YouTube videos” have already been replaced with notices of the “copyright claims.”

Media Bistro’s TV Spy reported that KTVU vice president and general manager Tom Raponi claimed the station was just trying to be sensitive by getting the videos of its error to disappear. Raponi is quoted as saying:

“The accidental mistake we made was insensitive and offensive.  By now, most people have seen it.  At this point, continuing to show the video is also insensitive and offensive, especially to the many in our Asian community who were offended.  Consistent with our apology, we are carrying through on our responsibility to minimize the thoughtless repetition of the video by others.”