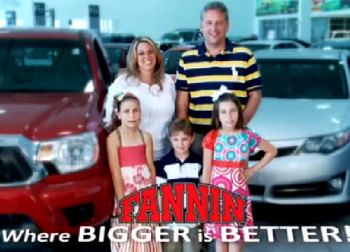 The Ashland Daily Independent in Kentucky fired reporter Ken Hart over one of his Facebook posts, Jim Romenesko reported.

His post criticized local car dealer Fannin Auotmotive’s TV commercial.  His publisher fired him, and Hart said he was told the car dealer Chris Fannin “apparently threatened to pull his ads” on the station because of Hart’s post.

What did Hart write to get him in so much trouble? He suggested Fannin had his children “talk with speech impediments” in the commercial.

Hart deleted the Facebook post after “about 24 hours,” which was set to public at the time, he told iMediaEthics.

“I can’t remember word-for-word what the post said,” Hart wrote, but he said “to the best of my recollection, it was something like:  “Memo to the owner of a certain local auto dealership: Coaching your children to talk with speech impediments in your TV commercials really isn’t cool and it will get them teased unmercifully in school. But, I guess that’s OK as long as it helps to sell cars.”

Below, see the video.

The children are on screen for just a few seconds at the end of the commercial to say the name of the company and its tagline.

Hart told Romenesko he said he thought Fannin’s children, who were in the ad, “were being coached to talk like babies.”

Hart said he hasn’t had any contact with the Daily Independent since his firing and his story has been in the media.

“I appreciate the support I’ve received from my friends and from the community since going public with my story,” he added.

iMediaEthics has written to the Ashland Daily Independent for comment. We’ve e-mailed and left a message with Fannin Automotives seeking comment.