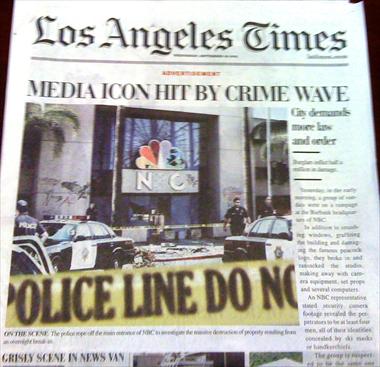 The Los Angeles Times has upset its readers yet again by blurring the lines between advertising and editorial.

This time, the newspaper published a full-page ad on the front page.

While the advertising wrap was labeled “advertisement,” it “mimicked the actual paper’s front page including the masthead and carried the headline, ‘Media Icon Hit by Crime Wave,’ AdRants described.

“This move isn’t a surprise. It’s just a depressing indicator that some media are drowning and are willing to do absolutely anything to stay afloat.” AdRant added.

Likewise, ZDNet called it a “new low” for the newspaper.

“For those of us who come from the ranks of newspapering, we remember a time when the front page was a near-sacred place, reserved for the day’s best and most important news reports and, more importantly, a page free of advertising,” ZDNet’s Sam Diaz wrote.

A journalism professor also criticized the advertisement, Los Angeles ABC-affiliate KABC-7 reported. “I think they’ve said something by what they’ve done. I think their actions speak far louder than any words that they can say. They’ve said that the commercialism of this, the financial implications of this are more important than what journalism should mean in our society,” USC Creative Media professor Doe Mayer is quoted as saying.

The Los Angeles Times’ readers representative, Deirdre Edgar, published online that same day some feedback from readers and The Times’ defense.  Edgar noted that by noon on the day of publication, Sept. 29, many readers had voiced complaints about the advertisement.  In fact, “The Times had received 61 e-mails, all but one of them critical, and 51 phone calls.”

The Los Angeles Times’ vice president for communications, Nancy Sullivan, is quoted as defending the wrap:

“The Times collaborated with NBC to launch ‘Law & Order Los Angeles’ in a big, creative way for the hometown audience. This is an exciting, innovative ad that takes the show’s beloved, 20-year ‘ripped from the headlines’ concept and puts it front and center for Southern California.”

Some of the readers’ complaints including that  the wrap was “a new low,” offensive,” “a mockery of the actual news” and “in extremely poor taste.”

Further, “A spokesperson for NBC Universal said that the mock ads also ran in the Chicago Tribune, Philadelphia Inquirer, Baltimore Sun and Orlando Sentinel, but declined to reveal the cost of the campaign,” The Wrap reported Sept. 29.

The Los Angeles Times’ readers and media writers haven’t been pleased with the newspaper’s move toward nontraditional advertising.

StinkyJournalism reported in July when The Los Angeles Times ran an advertising wrap around its front page. The advertisement promoted a new King Kong ride at Universal Studios Hollywood.  In response to the ad wrap, the five supervisors for Los Angeles County wrote a letter of complaint to the newspaper, criticizing the practice as distasteful, “alarming” and “offensive.”

The Los Angeles Times was also criticized in March for selling its front page to Disney to promote its new movie “Alice in Wonderland.”

In April 2009, the Los Angeles Times was also criticized for publishing a front-page column ad for the TV show “Southland.”