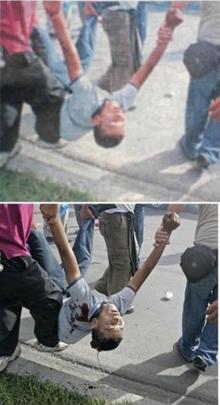 CubaDebate discovers the iconic photo of the late Isis Obed Murillo, a victim of recent Honduran violence, was "white-washed" by the "pro-coup newspaper, La Prensa." Compare image on top, published in La Prensa, with the one below. Photoshop was obviously used to reduce the visual horror of the young man's fatal injuries.

Al Giordano’s blog, The Field reports that “CubaDebate discovered the “white washing” of violence in Honduras by the “pro-coup newspaper, La Prensa.”

Giordano writes: “The now-iconic photograph of the late 19-year-old Isis Obed Murillo, being carried by his friends to seek medical help moments after his shooting by gunmen during Sunday’s demonstrations in Tegucigalpa, was also published by the Honduran daily… Except that La Prensa chose to airbrush the young man’s blood out of the photo.” The image above at top was published by La Prensa. Compare to the image below that includes horrific details.

When one commenter, bzr, tried to repeat the newspaper’s published excuse–that the undisclosed photo alterations were a “simple processing error“– other commenters were quick to dispute this claim.

Matthew Dubuque writes (emphasis original): “What kind of random ‘process’ would ‘accidentally’ whitewash BOTH the blood on the ground AND the blood on his face while leaving ALL the rest of the foto intact? Obviously there was some intentionality behind this selective and consciously deceptive whitewash. ‘News’ that is deliberately and carefully DESIGNED to deceive and brainwash.”

Giordano answers in comments: “Yeah, it’s pretty funny that La Prensa seeks to blame the ‘process’ of the photo, as if the machine just mistakenly took out the color red… except for the red tee shirt of one of the men carrying the body. There simply is no photoshop application that exists that could do that by accident. What’s interesting is that they’re feeling the heat enough over it to have issued any correction at all.”