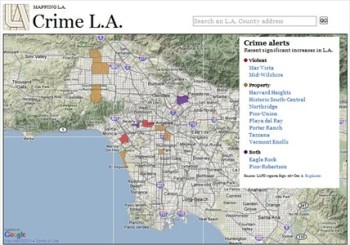 The database is set to offer “a comprehensive stream of data on serious crimes, tracking trends and offering alerts at the neighborhood level” and is based off LAPD and LA County Sheriff’s Dept. daily reports, The Los Angeles Times explained.  Information comes from the LAPD and the sheriff’s dept. because they “patrol the vast majority of the county.”

The new database, which launched Sept. 30, takes already existing internal police programs to the next level by making them available to the public.  With the database, users can “analyze crime statistics, search historic crime patterns and receive alerts when several crimes occur in an area over a short period of time.”

The LA Times noted that it “first approached LAPD officials in the spring of 2008 with a request for an automated, electronic feed of raw crime data. In January 2009, it went to sheriff’s officials with the same appeal.”

Check out the database here and read more about the development of the database on the Los Angeles Times here.