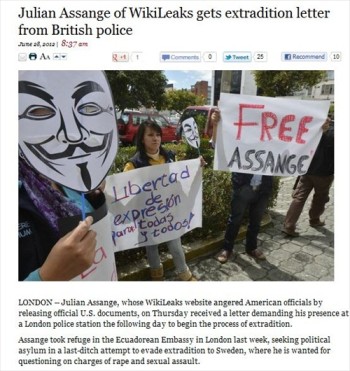 Seriously?  Days after we contacted the Los Angeles Times about errors in its Julian Assange reporting, the newspaper has made the same mistake of wrongly reporting there are “charges” against Assange.

We wrote earlier this week about eight corrections on stories wrongly claiming that Julian Assange is wanted on charges of sexual assault.  As we wrote, Assange sought and was granted eight corrections by McClatchy.  Interestingly, McClatchy corrected stories by four newspapers — the Los Angeles Times, the Miami Herald, the Charlotte Observer and the Sacramento Bee — without letting their editors know either that their content was being corrected or that their content needed to be corrected.  We contacted editors at all four newspapers about the errors, and all but the Los Angeles Times told us they would issue formal corrections.  See here our report.

In the case of the Los Angeles Times, we contacted the newspaper’s readers representative, Deirdre Edgar, who re-directed us to the newspaper’s public relations department.  The Los Angeles Times’ Director of Communications Hillary Manning asked us for our deadline, and then didn’t answer when we called and e-mailed to follow-up.  So, iMediaEthics’ publisher and editor-in-chief Rhonda Roland Shearer called the newsroom looking for answers.

Then, we received an e-mail from Manning indicating a bit of displeasure that we reached out to the newsroom about a newsroom error. She wrote: “I understand that you’ve been placing calls to our newsroom re: this matter. Please know that your request has reached the correct department here and we are handling it. No need to contact additional people at the Los Angeles Times.”

We followed-up but had no response until June 27 at 12:08 AM EST, about five hours before our stated deadline.  Manning wrote then:

“Unfortunately it’s been a very busy couple of days and the conversations that you initiated with various people at LA Times have made it a bit more difficult to understand what you’re asking for and how to respond. We’re doing our best to provide a response given your deadline.”

After we sent three follow-up e-mails with no response from Manning and we pushed back publication about nine hours hoping for a response, we went ahead and published. Still no response.

Meanwhile, the Los Angeles Times’ London bureau chief, Henry Chu, who had or shared bylines on the three stories in question, quickly responded and informed us he was personally seeking a correction on one of his stories.

But, despite our bringing the error to the Los Angeles Times’ attention, the newspaper again made the error in a June 28 article.  In the report “Julian Assange of WikiLeaks gets extradition letter from British police,” the Los Angeles Times writes: “Assange…is wanted for questioning on charges of rape and sexual assault.”  See here the story.

We have written to the Times’ readers’ representative Deirdre Edgar asking about this error and will update with any response.
UPDATE: 6/30/2012 11:24 AM EST: Fixed typo.