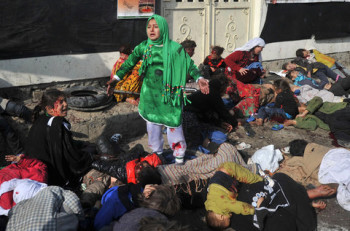 As Edgar explained, the photo showed “the aftermath” of “the attacks on Shiite Muslim gatherings in Afghanistan, which killed at least 59 people.” Specifically, the image highlighted a “blood-spattered young woman, screaming as she finds herself surrounded by bodies.”

According to Edgar, Los Angeles Times deputy managing editor Colin Crawford said that “we never run this type of image without discussions at the highest levels of the newsroom.”  He explained the “news value” outweighed any concerns about the photo’s graphic nature.

“I was taking pictures and I did want to help,” he is quoted as saying. “But I just saw that the bodies were completely destroyed and I said, ‘O.K. I can’t do anything for them, so I have to wait for whoever comes.’”