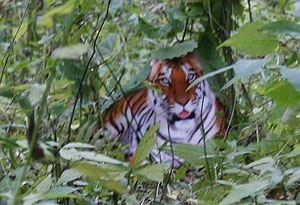 The infamous image of the fake south China tiger

“Today’s WSJ story on the rise of lawyers in China features Beijing lawyer Liu Xiaoyuan, who,n addition to his busy practice, blogs regularly on legal aspects of the major stories in the news. On Sunday, the Shaanxi provincial government released the long-awaited results of its investigation into “Tiger-Gate,” officially confirming what’s been known for quite some time– that the widely publicized photos of a rare south China tiger taken by a local farmer last autumn were, in fact, fakes.”