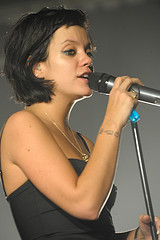 British pop singer Lily Allen was awarded undisclosed damages and the copyright to photos of her house, the Guardian reported.

The Daily Mail published pictures of her house in September 2010 and, in response, Allen charged the newspaper both invaded her privacy and violated copyright.

iMediaEthics wrote in October when Allen was awarded damages after she sued French magazine So Foot for reporting fake quotes attributed to her.

She also won 10,000 pounds from The Sun for republishing those fake quotes.