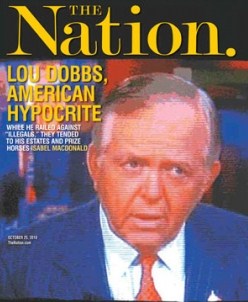 See above, the cover for the Oct. 25 issue of The Nation. Lou Dobbs has criticized the mainstream media for reporting on the cover story about him without contacting him for comment. (Credit: The Nation)

Former CNN news anchor Lou Dobbs labeled The Nation’s Oct. 25 cover story on him “a smear piece” and criticized mainstream media for reporting on the article without contacting him.

The Nation’s article, by Isabel MacDonald, claims that Dobbs’ contractors have hired illegal immigrants – which, if true, would be hypocritical of Dobbs, who has been quite vocal about immigration, ABC noted.  (See The Nation’s story here.)

Dobbs, a conservative talk radio host and former CNN anchor, is well-known for his anti-immigration opinions.  As The New York Times put it in Nov. 2009 when he left CNN, Dobbs’ “anti-immigration views have made him a TV lightning rod.”  “Dobbs has criticized employers who hire illegal workers, previously suggesting they should face felony charges,” ABC explained.

MacDonald, the freelance journalist who authored The Nation’s report, is a former communications director for progressive media watchdog Fairness and Accuracy in Media (FAIR).  In her article, she noted that she interviewed “five immigrants who worked without papers on his properties” and spent a year researching the article. The immigrants were identified by pseudonyms.

Dobbs and MacDonald have discussed the article in several interviews together – both on Dobbs’ radio program and on mainstream media outlet programs.

For example, both appeared Oct. 8 on ABC’s Good Morning America. Dobbs said on Good Morning America that “my disappointment is not with The Nation magazine – they are a left-wing activist advocacy publication.  My disappointment is with the national media that has just gone along with this as if it were somehow  valid without doing any reporting. And, by the way, not a single one of those organizations contacted me for a statement – other than CBS News,” Dobbs said.

In response, MacDonald questioned why Dobbs declined to comment in The Nation article – even though she reached out with questions for him. He explained he didn’t comment because “it was a foregone conclusion.”

MacDonald noted in her article that “Responding to The Nation’s request for comment from Lou Dobbs, Chad Wilkinson, producer of The Lou Dobbs Show , said by e-mail that ‘Lou will not be commenting for the piece.’ Dobbs’ attorney, Robert Zeller, clarified by e-mail that Dobbs would only answer questions if posed on his live radio show. (The Nation agreed to appear on the show but only after publication of this article.)”

The Nation’s publicity director Ben Wyskida told StinkyJournalism via e-mail that the Nation offered Dobbs the chance to “respond and either refute, modify or comment on claims in the article” multiple times but “he refused.”  However, “a week before the piece came out [he] told the magazine that he would only respond to us on air, to Isabel, on his show, that day – which of course we would never do. (Discuss an unfinished article, on air with it’s subject before it was edited or done.)”

“To his credit, he did agree to speak to her on his show the day the article came out. But in his public interviews he criticized the magazine for refusing to include his position on immigration or his perspective, when he refused (through counsel) several times over five days to have any comment in the piece itself,” Wyskida wrote. “For what its worth, there was a very intensive discussion about what parts of the investigation to include in the piece – his comments could have absolutely shaped the final article.”

In an Oct. 7 interview on Dobbs’ radio show, MacDonald defended her article.  “This article is fact-checked 100 percent.  It is legally vetted,” MacDonald is quoted as saying.

Dobbs likewise defended himself, saying that he was told all his workers were legal.  “I had been told that they were absolutely legal,” Dobbs is quoted as saying. “And you were told the same thing … and you didn’t mention that in your piece.”  StinkyJournalism has written to Dobbs asking him to explain this comment.

StinkyJournalism asked The Nation about that claim from Dobbs.  In response, Wyskida told us via e-mail that “That is not true. There were two companies in question – his stable managers and his landscaper – and both were vague about what Mr. Dobbs knew and when, in our interviews.”

We also asked The Nation what motivated the investigation, given Dobbs’ labeling of the article as a “smear.”  Wyskida explained that “the investigation was motivated by a look into the horse and stable industry and its ties to illegal immigration. It’s known as a category where many undocumented workers are employed and thus, an interesting case study.

“This led us to Mr. Dobbs. As for his allegation that it’s a ‘smear,’ you won’t find in his response a denial of any facts in our piece or any specific mention of inaccuracies,” Wyskida wrote.