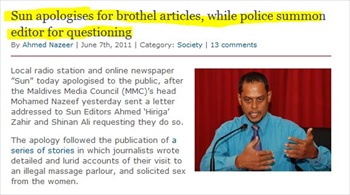 The Sun has apologized for its reports on brothels. (Credit: Minivan News)

The Maldives Media Council (MCC) and Maldives Journalists Association have both criticized the Sun magazine and its website for its undercover report on illegal brothels.

According to Minivan News, the MMC “is the media’s governing authority.”  The MMC reportedly “forwarded the case to the Prosecutor General.” According to an article on the Maldives government website, the MMC’s fifteen members were elected in May 2010. The council is made up of seven members from the public and eight from the media. The Maldives Journalists Association’s vice president, Ali Shamaan, wrote in an e-mail to iMediaEthics that the seven members from the public were “appointed from a list of 34 members sent by the President to Parliament.”

MInivan News reported that the Sun‘s reports have “sparked a public debate on morality and journalism.”

The undercover report allegedly revealed that some Maldives’ “‘massage’ and medical treatment center” have been “a front” for selling sex.  The “series of stories” reported that three journalists reported “detailed and lurid accounts” of their visit to a brothel and ‘solicited sex.”

Minivan News reported that the MMC’s media ethics code prohibits the media from violating the “constitution or Islam” in stories.  The code also reportedly bars the publication of “pornography, sex stories, stories that encourage sex or anything that describes such activities.”

After a request from the MMC, the Sun apologized on June 7 for its brothel stories, Minivan News reported.  According to that apology, the Sun stated the articles were “not written professionally.”  The apology went on to claim that the story was reported to “draw the attention of the concerned authorities and the public over the issue,” according to Minivan News.

In a June 6 press release posted on the Maldives Journalists Association, the MJA stated the Sun’s articles weren’t up to moral standards of the Maldives, but expressed concern over the MMC’s sending the case to the prosecutor general and calling for a retraction.

The MJA explained that the MMC’s response “might discourage investigative journalism and the attention might be shifted from the original case which is about illegal brothels.”

iMediaEthics asked the Maldives Journalists Association for further comment. The MJA’s vice president, Ali Shamaan, responded that it has no further comment beyond its previous press release.

iMediaEthics has written to the MMC for comment and more information and will update with any response.