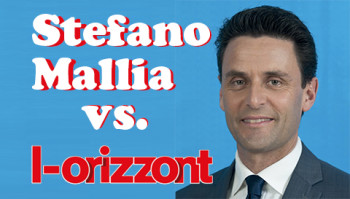 Maltese newspaper I’Orrizont is being sued for libel by politician Stefano Mallia. Mallia is running for Member of the European Parliament this year as a member of the Nationalist Party.

Mallia is suing over the article,” Company in which Stefano Mallia was a director: €2.5 million in contracts over 5 years.”

The article claimed that Mallia’s company received €2.5 million in government contracts, but Mallia says that the contracts were “won by an international company together with a company in which he was a director.” Mallia is director of the company EMCS International, which identifies itself as a “professional services firm offering a one-stop-shop to foreigners seeking to do business from or within Malta.”

“The newspaper, however, attributed the whole tender amount of €1.9 million to just the company in which he was director, when in actual fact this company’s share of the contract was of €80,000 spread over four years,” the Times of Malta reported.

The article in question does not appear to be online. iMediaEthics has asked for a copy of it.

In a statement on the lawsuit, Mallia called it a political dig, saying it was “an example of the most shameful way in which politics can be done,” according to the Malta Independent.

“It is shameful that l-Orizzont, a supposedly independent newspaper, is today participating in this mud-slinging campaign. I truly hope that one day politics will become more positive and of greater relevance to the people because this is what the people want but unfortunately the Malta Labour Party has not noticed this and keeps on echoing the politics of the past.”

I-Orrizont is a Maltese-language daily newspaper published by the General Workers Union.

Earlier this year, I’Orrizont was found guilty of libeling two journalists, Anton Attard and Natalino Fenech, by reporting in 2012 that they “pocketed millions in consultancies” and had overseas bank accounts, as iMediaEthics wrote at the time.  The newspaper’s editor, Joseph Caruana, was ordered to pay  €5,000 to each journalist.

iMediaEthics has written to I‘Orrizont and Mallia for comment regarding the lawsuit. We’ve also written to EMCS, the company for which Mallia is a director. We’ll update with any additional information.

UPDATE: 4/16/2014 1:41: PM EST Josef Caruana, the editor of I’Orizzont told iMediaethics by e-mail: “The court case is pending appeal and therefore I am not in a position to comment regarding the matter.”