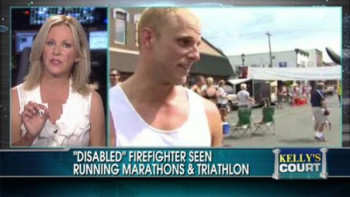 Fox News’ Megyn Kelly was sued for her 2011 segment on her show Kelly’s Court that criticized and raised questions about Aaron Marjala, a former firefighter who receives disability payments but runs marathons.

But the lawsuit was dismissed because the judge, Milwaukee County Civil Court Judge Jeffrey Conen ruled, according to the Journal Sentinel:

“The viewers could independently judge whether the defendant’s opinions and comments were reasonable and make up their own mind about the duty disability system and Mr. Marjala’s receipt of the benefits.”

Marjala has “permanent damage to the ulnar nerve in his right arm” and is “permanently disabled.” He was “found to be permanently disabled as a firefighter by the State of Wisconsin” in 2008, the lawsuit states, despite two surgeries to attempt to fix the nerve damage. Further Marjala’s lawsuit says he asked to have a “desk or other light duty job” in the fire department because of his injury but there weren’t any open.

“The ironman too injured to fight fires, Aaron Marjala, was one of Wisconsin’s bravest until he banged his funny bone on a kitchen counter at a Milwaukee firehouse. Oh, the horror.”

Her guest, lawyer Lee Armstrong called for an investigation into why the former firefighter receives disability when he can run marathons.

Kelly “falsely stated that Marjala’s purported disability was based upon his ‘hitting his funny bone on a kitchen counter,’ rather than upon permanent nerve damage,” the lawsuit claims.

Marjala sued Fox News, Kelly, her guest Armstrong as well as Robert Whitaker, who previously had been a guest on local Fox affiliate Fox 6, asking questions about his disability. The Journal Sentinel uploaded Marjala’s lawsuit here.

After the dismissal, Marjala’s lawyers, Craig Powell and Michael S. Hart, claimed that Kelly’s segment “was a cheap shot at Mr. Marjala that left out key facts” and the ruling was “a victory for dishonest speech,” the Journal Sentinel reported.

iMediaEthics has written to Fox News and Marjala’s lawyers for comment.