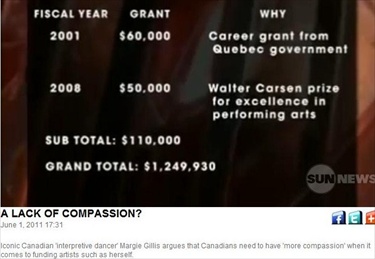 We asked Gillis’ foundation, the Margie Gillis Dance Foundation, for comment about the interview and also further information regarding some of the issues broached in the interview.

The general manager of her foundation, Michel Raymond, responded to our e-mail on behalf of the foundation.  Raymond added that “Margie’s comments might differ, but she’s insanely busy with her teaching and rehearsals and will not have time to reply personally to all the emails we’re getting for quite some time.”

Raymond noted that the foundation and Gillis haven’t had any contact with Sun or its reporter Erickson since the interview.

Raymond explained to StinkyJournalism via e-mail that Gillis was “supposed to be interviewed on the reasons why the arts should benefit from some public funding.”  According to Raymond, Gillis was “quite prepared to do that even if she knew she was not going to be in friendly territory. After all, what is the use of preaching to the converted?”

However, as Raymond noted, Erickson centered her interview with Gillis specifically on the funding Gillis receives.  “It became a personal attack on Margie Gillis and her artform,” Raymond commented.

“The ‘journalist’ made no attempt to hide the fact the her line of questioning was tinted with her own personal views. Her behaviour was rude, impolite, mocking and belittling a life’s worth of work. Her ‘research’ was less than thorough; the figures she quoted were not put in context as they should have been in an objective interview by a real journalist.”

iMediaEthics asked if Gillis had any comment regarding Erickson’s comment on air last week that she’s received negative feedback over her interviewing Gillis. Erickson went so far as to say she’s been “bullied” by viewers, which is the same word some have used to describe Erickson’s interview of Gillis.

Raymond responded: “When you bully someone publicly to excite crowds and generate ‘ratings’, surely you expect reactions from the public, Ms. Erickson.”

Throughout the first half of the interview, Erickson repeatedly brought up a figure of $1.2 million that Gillis and her foundation have received.  At one point, Gillis attempted to explain the figure and counter Erickson’s claim that the money went to Gillis over 13 years.  We asked Gillis’ foundation about this figure and if she or the foundation had any clarifications, comments or responses to any other questions asked on the show.

Raymond offered a bit of biography, explaining that Gillis became a professional dancer in 1976 and her foundation was created five years later, in 1981. Over the years, “The level of funding from the Canada Council for the Arts, the Conseil des arts et des lettres du Québec and the Conseil des arts de Montréal has varied.”

The $1.2 million figure doesn’t just provide a salary for Gillis but also pays three others “who earn their living working at the [foundation] as well as many other contractual collaborators (lighting designer, stage manager, costume designer, music composer, etc.) – not to mention operating and touring expenses,” Raymond wrote.

That money came “mainly” from the Canada Council for the Arts, but also “incorporated sums from privately funded awards (such as the Walter Carsen prize) that are coordinated but not funded by the CCA,” according to Raymond.

“Had Ms. Erickson done a fair job, she might have said” something like what artist Louis Laberge-Côté said about Gillis and the arts.  Laberge-Cote wrote about the interview (see here) and among other comments, said:

“We should consider cultural public funding as a collective investment and certainly not as a ‘waste’, to use one of Miss Ericksonʼs favourite terms. A collective investment of 1.51 billion over 5 years according to Canadian Heritage, so about 300 millions a year on a budget of over 280 billion annual expenditure on the federal level.”

Raymond added that the foundation is suggesting people opposed to the interview complain both to the CBSC and to Sun TV advertisers.  See here a letter to Gillis’ Facebook fans, which lets fans know how they can file any complaints over the broadcast and provides contact information for the advertisers.