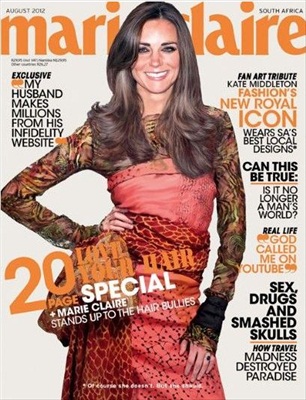 Marie Claire South Africa Photoshopped an image of Kate Middleton to dress her in “clothes by South African designers” and feature her on the August 2012 cover of the magazine. Middleton “has never agreed to pose for the cover of any fashion magazine,” according to Christian Post.

The UK Telegraph reported that the magazine doctored a photo of Middleton’s “head and hands” with “the body of a fashion model.”    The magazine’s editor, Aspasia Karras, is quoted by the Telegraph as saying:

“The cover is actually a hyper-real illustration of Kate, meant to be a fan art tribute to fashion’s new royal icon.”

We wrote last year when UK fashion magazine Grazia admitted to “inadvertently” Photoshopping Middleton for its cover photo.  The magazine edited out Prince William and duplicated her arm.