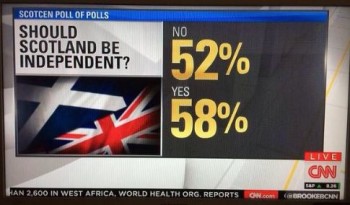 CNN apparently had a graphics and math fail in a report today on the Scottish independence vote.

According to an image circulating Twitter, in a live broadcast hosted by CNN anchor Brooke Baldwin, CNN reported ScotCen, a Scottish social research organization, found 52% don’t want Scotland to be independent and 58% do — for a total of 110%

Scottish voters have given it 110% according to CNN pic.twitter.com/0Z2WfYsiDx

Baldwin’s show airs between 2 and 4 PM ET, according to her Twitter feed. One posting of the image was on Twitter at 3:04 PM.

At least no matter what Scotland decides, they are giving it 110%. #ScotlandDecides #CNN pic.twitter.com/fl9dzQlaYL
— Brady (@burninggoats) September 18, 2014

iMediaEthics has written to CNN to confirm that the image is in fact real.

Earlier this year, Fox News aired a graphic suggesting that a total of 137% of New Jersey residents had an opinion on the lane closures near the George Washington Bridge (also known as Bridgegate), as iMediaEthics wrote.