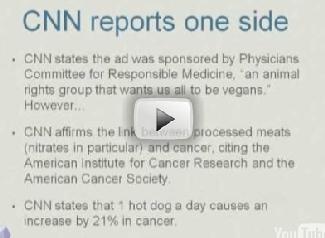 Mathematician Rebecca Goldin spoke to members of the Mathematics Association of America about the media's "use and abuse" of statistics. She said "bad science" is often to blame.

Here’s an article that explains the media’s “use and abuse of statistics.” Rebecca Goldin, a mathematics professor at George Mason University, spoke to members of the Mathematical Association of America (MAA) about the effects of poor reporting – and poor scientific studies – on public opinion, public policy and legislation.

Goldin cited several examples, including a CNN story: CNN reported on an ad that says hot dogs cause cancer, and said the ad was sponsored by the Physicians Committee for Responsible Medicine, “an animal rights group that wants us all to be vegans.” CNN claimed “research published in reputable journals” linked consumption of processed meats (nitrites, in particular) with cancer.

Importantly, Goldin pointed out, CNN failed to report the findings of studies conducted by other organizations, including the American Medical Association (AMA). The AMA stated that the available evidence did not confirm any such association. Goldin said, in fact, close examination revealed, that all of the studies had serious flaws. Journalists need to have the basic skill set to make these kinds of discrimination’s themselves between flawed and sound statistical  evidence. The article gives a 4 minute YouTube clip of this example.

Goldin says both journalists and readers/viewers need to understand important concepts from the field of statistics. These include causation versus correlation, relative risk versus absolute risk, scales and orders of magnitude, margin of error and the mean of statistically significant. She says reporters’ lack of understanding of these basic concepts leads to faulty reportage citing flawed statistics. But she makes sure to point out that reporters are not the only ones to blame – rather, scientific studies themselves are often inaccurate or biased, leading to false findings. “Bad science has consequences,” she said.

Goldin is research director for the Statistical Assessment Service (STATS), a non-profit associated with George Mason University.  “It has as its mission to educate journalists and the public about the appropriate use of statistics in all sorts of fields,” she says, “It also serves as a media watchdog group. So when the media gets something wrong, sometimes we’ll pursue what we believe to be more representative of the science behind the topic. This happens with some frequency.” The article provides a link to a full interview with Goldin. Despite these legtimate ideals of the virtues of statiscal rigor, it should be noted that SourceWatch is highly critical of STATS for being biased. They note that STATS is linked to monies donated by conservatives such as Pat Buchanan and Pat Robertson.