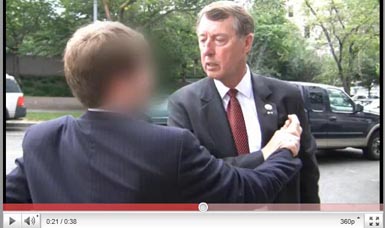 By now, the video of U.S. Rep Bob Etheridge (D-NC) grabbing a young videographer has gone viral on the Internet.

Etheridge has apologized, but news sites and blogs are abuzz with the ethics of the media’s reporting of the video.

In the video, Etheridge is walking toward the cameras, is stopped by the two young videographers and asked if he supports the Obama agenda.  Etheridge asks them who they are, and the only identification they give is that they are students.  Etheridge grabs the wrist of one, while continuing to ask who they are, and then pulls that person into what a Washington Post writer describes as a “hug,” before walking past them.

The two videos, first posted on YouTube June 11, were sent to the conservative Andrew Brietbart’s site BigGovernment.  BigGovernment posted June 14 a story and an edited version of the videos and the story was picked up nationally.

The two videographers are unidentified and their faces are blurred in the video.  Politico reported  June 14 that Mike Flynn, who posted the video on BigGovernment, said they requested no attribution but identified themselves as students.

But, “I think the video speaks for itself,” Politico reported Flynn said.

Politico also reported that Democrats are questioning the video’s source.

StinkyJournalism reported March 28 on the ACORN video, which was shot by activists incriminating the ACORN organization and eventually leading to its shutdown.  That ACORN video was broken by Brietbart’s Big Government site.  It was later revealed that the video’s editing suggested a different picture than the actual events and that the media was misled in its reporting of the video.

The Hill noted June 14, as important, that the Etheridge videographers do not identify who they are, or than “students,” and they do not reveal where they go to school.

The Washington Post blogged that the National Republican Congressional Committee (NRCC) said it isn’t responsible for the video.  The Hill reported that Democratic National Committee spokesperson Brad Woodhouse said that he doesn’t believe the NRCC.

The Boston Herald reported June 15 that “Breitbart said the pair don’t work for him and were not paid.”

A Google News search June 18 at 11:30 AM EST of Etheridge’s name with the keyword video produces more than 800 articles.

But, on June 15, several were questioning the level of reporting on this incident.

But, Bob Stone, aka Ethics Bob blog, whose bio states he “teaches business ethics at the University of Redlands,” wrote June 17 that “Shamefully, some in the liberal media, including MSNBC’s Chris Mathews, the Washington Post’s Chris Cilizza, and the Charlotte Observer, defended Etheridge. Worse, Politico reports that the DNC is blaming the Republican Party.”

Stone listed CBS News, CNN, NPR, the LA Times, the Wall Street Journal, and the online editions of the New York Times and The Washington Post, the Huffington Post, Salon, and Politico as covering the video’s story.

David Weigel wrote on The Washington Post’s conservative blog “Right Now”  that reader reaction to his first story on the video was “hateful, and frankly, ignorant.”  Weigel wrote that he was “accused of ‘minimizing’ the incident, of defending Etheridge, and of working off of Democratic talking points.”

Weigel had written his first story June 14, he says, focusing on summarizing what happened in the video, and learning what was behind it and “where the story was going.” He described the altercation as Etheridge “irritated, held the wrist of the first cameraman, then pulled the student to his side and grabbed him in a hug.”

In response to critics, Weigel pointed out that the Drudge Report posted  the headline “WASH POST: NOT AN ASSAULT, A ‘HUG,'” linking to Weigel’s story. He stated: “I never defended what Etheridge did. And I’m never going to post a video at face value without asking whether it came from. People like these e-mailers will continue to whine, sneer, and hurl insults; I’ll continue to be a journalist.”