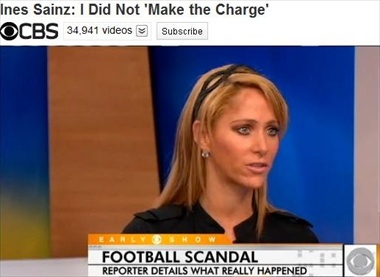 Ines Sainz, pictured above in an interview with CBS posted on YouTube, said that she won't report from locker rooms anymore. Her September interview in the NYJets locker room led to a sexual harassment claim. (Credit: CBS News)

Last month, a sexual harassment claim was filed against the New York Jets after team members were accused of cat-calling after Sainz.  As StinkyJournalism reported, the NFL commissioner ruled the Jets were “unprofessional” in their behavior around Sainz.

According to the Herald, Sainz took a one month break following the incident.  “I’m not going into the locker rooms anymore,” Sainz is quoted as saying Oct. 14 in a news conference. “It’s not a good place right now for me. I don’t want to be in there.”

She explained that she took the break because she didn’t want to be the center of attention. “I’m not looking for that kind of publicity. It affects my career and development in the States.”

“If I dressed properly or not, I have nine years of my career making interviews with top players all around the world and I can’t believe that someone says my outfit is not proper. It’s unfair treatment. I believe the media thought they were going to find a victim but clearly I don’t feel like a victim,” Sainz is quoted as saying.