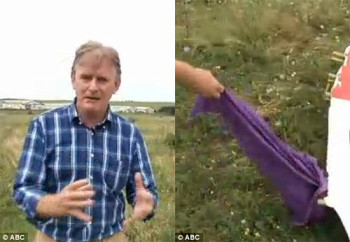 He lifted a piece of cloth, presumably a scarf, attached to the wreckage of the plane. He picked up and lifted a seat from the crash as well.

He said on air: “Is this a proper crime scene? Is this being treated as a proper investigation? Certainly not.” He added,

“You will see little bits and pieces of people’s everyday lives. Someone’s shawl there. Over here, there’s one of the backs of one of the chairs…Over here, another large chunk of the aircraft and very sadly a lot of personal items.”

More video of his segment is on Radio Australia.

Williams commented in his actions on ABC radio Monday.

“I am guilty of picking up, touching a scarf on the ground and that’s because, there are piles of people’s belongings that have just been collected and dumped on the roadside, they’ve been picked through,” he said.

However, he argued “it’s not as though it’s a crime scene, an uncontaminated crime scene there.” He added “the evidence is everywhere you walk.”

In contrast with Williams’ defense, Sky News apologized when its reporter, Colin Brazier, went through victims’ belongings on air. Brazier also wrote a column explaining what he did and apologizing.

Despite Williams’ remarks attempting to justify his actions, ABC re-edited Williams’ report to remove the clip showing him tampering with luggage. The ABC told iMediaEthics by e-mail:

“The ABC has reminded its journalists of their responsibilities when reporting from an air crash scene such as MH-17 and an online report has been re-edited to avoid any distress to our audience.”

Further, crash forensics expert Kirsty Wright told the Sydney Morning Herald that no one should alter the crash scene. “In any forensic investigation you don’t know what item, or items, are going to contain the most critical pieces of evidence,” she explained, adding:

“For this reason all items within a crime scene, no matter what they are or whether they seem relevant or not to the investigation at the time of recovery, should be treated the same. That is, they should not be handled or moved by people who aren’t trained experts.”