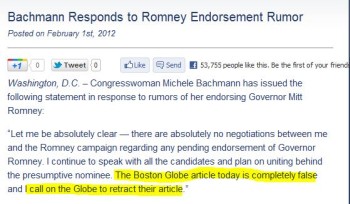 U.S. congresswoman Michele Bachmann (R-MN) claimed the Boston Globe’s story “that speculated she’d be throwing her support behind Mitt Romney” during his Feb. 1 visit to Minnesota, the Boston Herald reported.

According to the Herald, Bachmann called for the newspaper to retract its story, which she said was “completely false.”  The Boston Globe is owned by the New York Times Company. According to the Boston Herald, a spokesperson for the company said

“The original story on Boston.com said the Romney and Bachmann camps were in conversation in recent days about an endorsement. Boston.com ran a story today saying she denied it. It’s been on the site since this morning.”

The Boston Herald noted that the post in question “has apparently disappeared” from the Globe’s website. Still up is the Boston Globe story reporting Bachmann’s the Herald, the original post was “updated” with the Bachmann denial.  This was confirmed by a Globe spokesperson, according to the Herald.See here the Feb. 1 post in which the Globe reported Bachmann’s denials of the endorsement claim.  In that story, the Globe noted that its original report on tdenials of the Romney endorsement “despite a Globe online post suggesting the possibility.”

According to the Herald, the endorsement claim was based on anonymous sources.

The Boston Herald republished some quotes from the original story here.  The story read in part:

“Aides to Romney and the Minnesota congresswoman have been in conversation in recent days about securing the candidate’s endorsement by the Tea Party favorite and forceful public speaker, The Boston Globe has learned.

“The Globe was told that negotiations were still underway as late as last night, but the Romney camp stammered to explain why the GOP frontrunner would make a beeline for Minnesota — which doesn’t vote until Feb. 7 — when both Nevada and Maine are next on the calendar.”

Yahoo News noted that the original post “also suggested that the endorsement could be the first step in getting Romney to help pay off Bachmann’s presidential campaign debt.”

We have written to the Globe to ask if it replaced the original story with the story of her denials. We will update with any response.