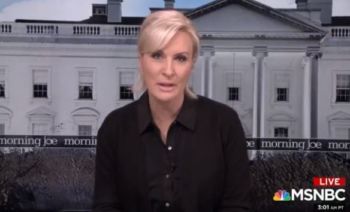 “I wanted to address a term that I used on this show on Wednesday that was vulgar,” Brzezinski said. “I knew it right away and I tweeted that it was a terrible choice of words and that I was sorry. But please allow me to say this face-to-face. The term is crass and offensive and I apologize to everybody, especially the LGBTQ community and to my colleagues for using it. It was a mistake.” She added that her father “would have found it so unbecoming and disrespectful.” The full apology is posted on NBC’s website.

As iMediaEthics previously reported, Brzezinski’s comment was in a Dec. 12 segment about Pompeo’s comments regarding the savage murder of journalist Jamal Khashoggi.

“The MSNBC host did not anchor Thursday’s show, with her co-host and husband, Joe Scarborough, saying she had a previous family engagement,” Politico noted.