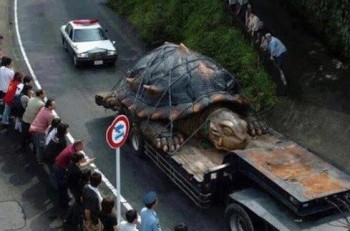 The above image has been used as evidence of a giant tortoise discovery. But, it's a screenshot from a movie. (Credit: Cinemotions, screenshot)

A fake photo and story claiming that an 800-pound tortoise was discovered in the Amazon River has been making the Internet rounds. However, the image of the huge tortoise being used as evidence of the discovery is actually based on a prop from a seven-year-old movie.

According to the International Business Times, the tortoise photo is a still image taken as a frame from the 2006 movie, Gamera the Brave. Movie website Cinemotions displays the tortoise phot in its advertising for Gamera. Similarly, SciFiJapan.com also showed the tortoise photo in its selection of stills accompanying an article about the movie.

SciFiJapan.com used the same tortoise in its selection of stills accompanying an article about the movie.

Various hoax websites including Hoax-Slayer, Waffles at Noon, and Hoax or Fact have already debunked the photo. The International Business Times reported that the fake photo and story “began circulating in 2012.”

The Topekas News spun up a tall tale even saying that the tortoise had been nicknamed “The Great Demon King Koopa (Bowser)” and that the U.S. military was instrumental in catching the monster creature using drugs and explosives in its food. TopekasNews wrote that a U.S. soldier said the beast was “running a good 20 miles per hour.”

Making the Topekas News article even more over-the-top, it claimed the tortoise demolished Noto, Japan and has earned legendary status:

“Some residents claimed at night its eyes would glow red as it emerged from the waters, usually hungry for small children or cattle, but its appetite knowing no true limit.  Other residents say the great demon turtle could be heard wailing in the distance, bellowing out toward the heavens and speaking ancient Japanese, the words they say were a call toward the dark gods of ancient.”

The absurd Topekas News article went on to claim nuclear power was responsible for the tortoise and that the “mutant” ate a bunch of animals.  “Unfortunately, the giant mutant attacked the town of Noto, Japan,” Topekas News wrote.  “It literally tore through dozens of houses, ate 3 grown tigers and several goats at the local zoo, leaving a brave injured bull elephant to die, and then tried to eat a butcher’s van that is used to haul meat. ”

While the Topekas News website doesn’t explicitly label its site satire, its homepage Nov. 23 stories stories that leave little doubt this is a satire website. Stories include:

The website does identify itself in its logo as a “progressive voice for the free thinker.”

Unlike Topekas News, which is a site filled with satire, News-hound apparently publishes viral news stories with clickworthy headlines. It also doesn’t have an “About Us” explaining the site’s purpose, but judging from headlines, the content appears to be unfact checked, sensationalized news stories, not satire. Headlines include:

iMediaEthics did a quick spot check of the last story in the list above, “Woman Kills Baby so She Can Play Farmville. It turns out it is a true news story, and that a 22-year-old woman was sentenced to 50 years after having “pled guilty to second degree murder for shaking her baby to death,” the Huffington Post and the Florida Times-Union reported in 2011.

Like the two sites above, iMediaEthics wasn’t able to find information about what the Tottenham News. The site’s homepage is written in English but there is some Turkish language found throughout the website. For example, the site uses Turkish-language dates such as 21 Kasim 2013 instead of a November 21, 2013 dateline. The site also has Turkish titles for pages like Advertising and Contact.