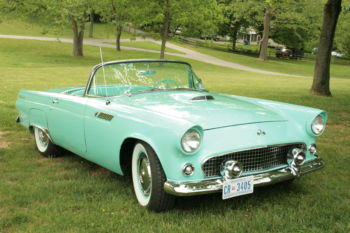 Sacramento CBS-affiliate KMAX fired staffer Angel Cardenas after he jumped on and dinged classic cars during a live segment.

Cardenas jumped on a Thunderbird and a Ford SUV and opened a car door against another Thunderbird. BuzzFeed posted video.

iMediaEthics has written to KMAX.

Cardenas said, according to Fox News, “the only person out here is a media coordinator, [the event] doesn’t start until later in the day… no one is out here to tell me which car I can’t go in, cause some of these are off-limits, so I’m just gonna live on the wild side.” He added, “I feel like a kid in a candy store without the owners because you can do anything.”

According to BuzzFeed, none of the cars Cardenas touched were damaged.

The Sacramento International Auto Show posted on Facebook, “After the Producer of the Sacramento International Auto Show reached out to the General Manager of KMAX TV regarding yesterday’s astonishingly awful incident, she received a call this morning from the GM that the reporter from the Good Day Sacramento segment has been terminated immediately and the station expressed their sincerest apologies for the incident.”