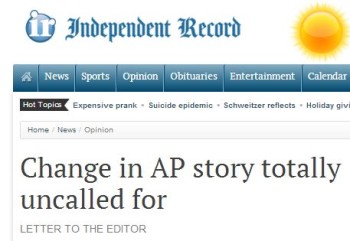 The Helena Independent Record issued an “Editor’s Note” after a copy editor “inserted the term ‘allegedly'” in a sentence about U.S. President Barack Obama being born in Hawaii. The Record is a daily Montana newspaper with a circulation of about 12,000 copies, according to Mondo Times.

“Our copy desk made an error in judgment in editing the Sunday 2A Associated Press story about President Obama’s trip to Asia and his place of birth. One of the copy editors inserted the term ‘allegedly’ born in Hawaii in the story thinking the other copy editor would catch it, he didn’t. It was a poor attempt at humor and a poor decision, but was not intended to be printed in the paper. Those responsible have been disciplined.”

The note is attached to a Letter to the Editor from Tom Laceky, who identified himself as a “retired AP staffer of 38 years,” who called the word insertion “small but damaging.”  Laceky added that because of “allegedly,” “your readers might make the embarrassing assumption that the AP has joined the birthers.”  Further, he wrote:

“‘Allegedly born in Hawaii?’ As if there is any doubt? That right-wing notion has been so thoroughly discredited that only Donald Trump and assorted other loonies still cling to it. Neither the AP nor -I hope – The Independent Record belongs in their company.

“No respectable news organization gives any credence to that claim anymore, and certainly does not accord it the respectability of ‘allegedly.’ I hope the IR will find out how this editing gaffe occurred and be sure it doesn’t happen again.”

Another reader, Barbara Arnold, noted she researched the story in question and found that only the Independent Record added “allegedly” to that report.

Arnold described her reaction as “very surprised and outraged” and called for the newspaper to “take steps for rectify this error.”

iMediaEthics searched the Independent Record’s website looking for the original article to see if it carries a correction, but we couldn’t find the article.

iMediaEthics has asked regional editor Gerry O’Brien if the original article is still posted, if the Independent Record ran a correction, if most stories typically go through two copy editors, how many letters of complaint the newspaper received, if this incident will affect any practices or policies at the newspaper, and for more information about the disciplinary action. O’Brien told us by email he had “no comment.”

The Los Angeles Times reported that O’Brien called the incident “a bad mistake by a very talented copy editor.”