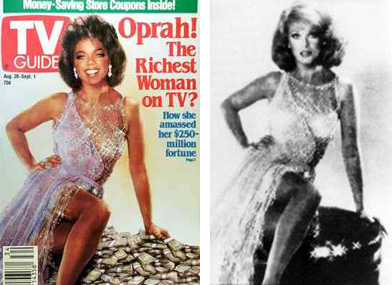 WHAT WERE THEY THINKING? This doctored image from the 1989 cover of TV Guide places Oprah's head on top of Ann Margret's body.

It was August 1989, TV Guide published the above image of Oprah Winfrey featured as queen of daytime TV talk shows on its cover. The doctored photo composites an image of Oprah’s head with Ann Margret’s body.

The Oprah TV Guide cover is only one example from a very good and updated list of altered photo cases on Dartmouth professor, Hany Farid’s web site, called “Photo Tampering Throughout History.” Many faked images in the list were made with techniques from the earlier days of photography that predates Photoshop. The best part of the list is examples of photo fakes that aren’t often seen around the web.

For those interested in learning more about photo fakery, go the Hany Farid’s Research page. His publications are found here. Professor Farid’s site continues to be an excellent resource on the subject.