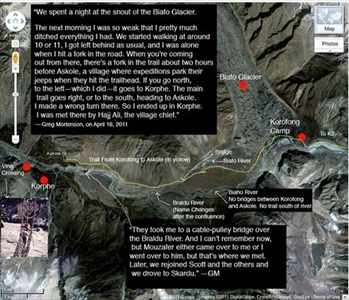 Outside magazine mapped Greg Mortenson's trip as described in Three Cups of Tea, but said it's not possible. (Credit: Outside, screenshot)

Kentucky radio station WFPL reported also reported that Outside magazine, which published an interview with Mortenson when the scandal first broke, has questioned the book itself.

According to WFPL, Outside has reported claims against “his climbing record in the Himalayas as well as the possibility that he accidentally wandered into the village Korphe on his way down from K-2.”

Outside reported that while Mortenson has stated he’s climbed the Himalayas “about half a dozen” times, an archivist of “Nepalese climbing trips” has no records of Mortenson.

Outside also alleged “Mortenson’s path is not possible” when matched with a map.

The University of Georgia announced it “has decided to withhold” its award for Greg Mortenson during the controversy and claims of fabrication against him for his memoir Three Cups of Tea, WFPL also reported.

The university announced in April it would be giving its annual Delta Prize for Global Understanding to Mortenson.