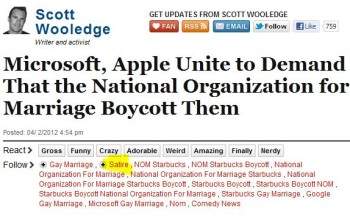 The report was aired by MSNBC’s Thomas Roberts, who is quoted as saying April 4,

“Tech rivals Apple and Microsoft are marrying up and asking the National Organization for Marriage its supporters to boycott their companies. This follows the release of secret documents last week showing part of the organization’s strategy to quote ‘drive a wedge’ between blacks and gays on the issue of marriage equality.”

Fox Nation reported that the story originated from a Daily Kos “satirical post” that the Huffington Post’s comedy section picked up.  See the satirical article “Microsoft, Apple Unite to Demand That the National Organization for Marriage Boycott Them” here.

The satirical story cites phony Microsoft and Apple spokespeople.  A clue could have been in the satirical story’s quote from Microsoft in which Starbucks is referred to as “those yuppie bean heads.”  Apple is quoted in the satire article as saying it wants a “thank-you card” and both companies refer to rainbows in their logos.

The original article, by Scott Wooledge, was published April 4 on the Daily Kos website, and the article on the Huffington Post’s website includes a note at the bottom reading: “NOTE: This piece is satirical. All quotations are fabrications for the purpose of satire.”  According to Mediaite, MSNBC’s Roberts said that the MSNBC report came from the Huffington Post’s, where it was clearly labeled satire at the end.

Roberts’ correction said : “Upon closer inspection, at the very end of the article it says it was satirical. We take issues of equality very seriously, not as satire. It was my error.”

In a follow-up post for the Daily Kos, Wooledge wrote “Lesson to MSNBC: Don’t believe everything you read on the internet.”

On Roberts’ correction, Wooledge wrote: ” We are all human, and occasionally we make mistakes. He has behaved responsibly and brought the error to his viewers’ attention, promptly and with humility, as any professional journalist would.”

Wooledge told iMediaEthics by e-mail that the post on the Daily Kos website was “tagged” as “snark.”  He explained that “it’s not unusual for us to post fake news stories [on the Daily Kos] to pull each other’s legs.”  Wooledge noted that he is “rather certain” that MSNBC’s Roberts spotted the story from the Huffington Post publication, which carried a disclaimer.

“I think it’s kind of sad that fact checking is so lax that a major media organization would run with such a story without asking Microsoft, Apple or myself the “original reporter” for comment., I certainly would have told them it was a spoof, and as you see, I’m not that hard to get ahold of, a few strokes of Google should do it. But MSNBC and Roberts are not that unusual. Many media outlets are not as scrupulous about checking sources as they could be and owning their responsibility to present good information. It’s a lesson to us all, not to believe everything we read on the internet or see on TV, which is a good lesson.”

MSNBC has been hoaxed by satire articles online before, as we have written.  In January 2011, MSNBC’s Rachel Maddow was hoaxed by satirical website ChristWire.org.  Maddow reported information from the satirical website’s report calling for Sarah Palin to “speak out publicly and forcibly for an American-led invasion to protect our interests in North Africa.”

A few months before MSNBC fell for the ChristWire.org report, the Atlantic Wire called out the Huffington Post for reporting on a separate satirical ChristWire.org post as if it were news, as we wrote in August 2011.

And, in July 2011, at least two outlets reportedly published stories based on a satirical ChristWire.org report that was headlined “Boycott Bill Murray for a Better America.”  The ChristWire.org article called the actor “a weak man, a murderer of lambs” and more.