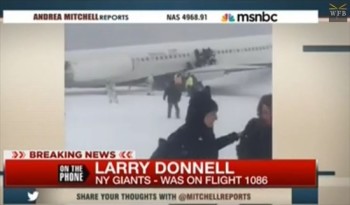 A screenshot from the interview with the fake Larry Donnell. (Credit: MSNBC, via Washington Free Beacon, screenshot)

MSNBC was duped by a prankster posing as New York Giants tight end Larry Donnell when reporting on Delta 1086, which skidded off the runway at LaGuardia airport yesterday, Mediaite reported.

The real Donnell was actually on Thursday’s Atlanta to New York City flight.

Pat Hanlon, a spokesperson for the Giants, told iMediaEthics by e-mail: “I don’t know anything about the prankster. In addition to what Larry posted on Instagram, to my knowledge, these have been his only public comments:

“I’m blessed to be safe and sound after our plane skidded off the runway at LaGuardia airport today. I feel fine physically and hopefully all the other passengers did not have any significant injuries. We were all shocked and alarmed when the plane started to skid, but most importantly, as far as I know, all of the passengers and flight crew were able to exit the plane safely.”

The person answered Mitchell’s first question asking how he was, stating, “Let me tell you, this is crazy. I’m fine, I’m fine now. But it’s scary.”

When she asked him where he was sitting, the person said “I was sitting in the — f**k her in the p***y.”

Mitchell didn’t appear to hear what he said, and continued asking him questions. MSNBC’s Tom Costello told viewers that “I think we were being had, Andrea.”

“I don’t think that was a legitimate witness, based on what he just said on the air, he uttered some, some profanities. I’m not sure that he’s legit.”

Mitchell then apologized, “Our apologizes to all of our viewers, we’re sorry about that.”

Video of the exchange is available below.

The New York Giants published a real statement from Donnell about the plane incident, but not the MSNBC prankster.

In a statement through the Giants, Donnell said he was “blessed to be safe and sound” and “fine physically.”