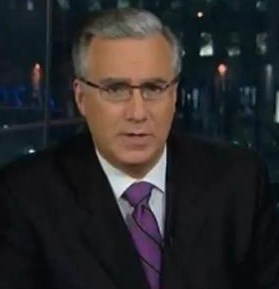 Keith Olbermann, pictured above in a screenshot from a YouTube video, was suspended from MSNBC after Politico revealed he donated to three Democratic candidates. (Credit:YouTube)

His suspension is without pay. His donations were the maximum donations permitted – $2400 apiece.  Olbermann is a well-recognized face for MSNBC and has “tripled MSNBC’s ratings at 8 p.m.,” according to Politico. The host of Countdown with Keith Olbermann has been called “the pre-eminent liberal voice on American television” by the New York Times.

NBC News’ policy prevents employees from donating or participating in political campaigns or groups as it “may create the appearance of a conflict of interest,” Politico noted.

In response to Politico’s fact-finding, MSNBC president Phil Griffin is quoted as saying:  “I became aware of Keith’s political contributions late last night. Mindful of NBC News policy and standards, I have suspended him indefinitely without pay.”

Olbermann admitted to the donations, but explained he didn’t raise money for any of the candidates:

“One week ago, on the night of Thursday October 28, 2010, after a discussion with a friend about the state of politics in Arizona, I donated $2,400 each to the reelection campaigns of Democratic Representatives Raul Grijalva and Gabrielle Giffords.  I also donated the same amount to the campaign of Democratic Senatorial candidate Jack Conway in Kentucky.

“I did not privately or publicly encourage anyone else to donate to these campaigns, nor to any others in this election or any previous ones, nor have I previously donated to any political campaign at any level,” Olbermann said.

Yahoo News reported that Olbermann “is a partisan host and expresses opinions on a nightly basis”  and “NBC has previously noted differences between what MSNBC hosts and their NBC News colleagues can do.” At the Jon Stewart and Stephen Colbert rallies last month, NBC News employees were forbidden from participating, but MSNBC hosts were allowed, for example.

However, given Olbermann’s suspension, Politico and other news organizations have noted that in 2006 NBC had no problem with its employee Joe Scarborough (also now a Politico columnist) donating money to a 2006 campaign  because “Joe hosts an opinion program and is not a news reporter.” Talking Points Memo has also found that MSNBC contributor Pat Buchanan donated $2,250 to Republican candidates from 2005-2008, years during which Buchanan worked for MSNBC. Buchanan and Scarborough are both conservative commentators. Neither has been suspended.

MSNBC describes Olbermann’s program as a “unique newscast that counts down the day’s top stories with Keith’s particular wit and style,” therefore Olbermann’s opinion would naturally be included.  Is there a double standard?  We’ve written to MSNBC to ask and will update with any response.

Salon offered speculation for why Olbermann was promptly put on suspension.

The UK Guardian reported the story, noting that “US journalistic ethics are extremely strict, barring media employees from donating to political parties or any other political involvement that might cause a conflict of interest.”

But, unlike the UK whose Press Complaints Commission can require print news organizations to deal with ethics complaints and abide by established ethics guidelines, the U.S.’s oft-cited code, the Society of Professional Journalists’ code of ethics, isn’t mandatorily followed by U.S. journalists.  Also, the SPJ cannot penalize or hold any journalists (including its members) to the code’s principles.

Reporters have been fired and suspended from various news organizations this year as news organizations seek to define the line between providing objective reporting and personal opinions.  National Public Radio fired Juan Williams last month after he revealed his personal feelings about seeing Muslims in airports on air at Fox News.  Some argued that Williams was fired because NPR couldn’t reconcile his dual role as its news analyst and Fox News commentator.

The Washington Post’s Dave Weigel resigned in late June after his private e-mails sent to the JournoList were published.  In the e-mails, Weigel wrote his opinions about conservatives, the beat he wrote about for the Post.

Also in July, four Arkansas reporters were fired from NBC-affiliate KARK-TV because of two video spoofs they made off-the-clock mocking their jobs.

Just this month, two reporters were fired from Alaska CBS-affiliate KTVA after accidentally leaving a recording on a political spokesperson’s voicemail.  In the recording, they discussed the chance of finding a “child molester” at Senate candidate Joe Miller’s rally.