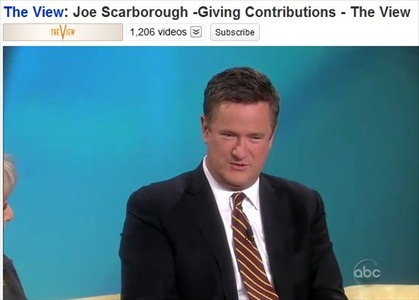 MSNBC host Joe Scarborough was suspended for two days without pay after Politico revealed he made political contributions, a violation of MSNBC’s policy.

Scarborough’s suspension comes exactly two weeks after fellow MSNBC host Keith Olbermann was suspended for similar political donations.  While Olbermann’s suspension was originally described as “indefinite,” he was back at work after two business days off.

On ABC’s The View, Scarborough responded to Barbara Walters’ question asking if he was a journalist or a pundit that “I don’t know what I am” and noted that “the rules have changed.”

He explained that he “got permission first” in the case of $4,200 contribution.  See the video of the interview here.

Politico reported Friday that MSNBC president Phil Griffin said he discussed “political giving” with Scarborough two weeks ago when Olbermann was suspended.  “In my conversation with Joe two weeks ago, he did not recall these contributions,” Griffin is reported to have said.

In a statement, Scarborough said he understands why he was suspended and apologized “to anyone who has been negatively affected by my actions.”    See the full statement here on the Tuscon Citizen website.  Scarborough stated:

“I recognize that I have a responsibility to honor the guidelines and conditions of my employment, and I regret that I failed to do so in this matter. I apologize to MSNBC and to anyone who has been negatively affected by my actions. …

“Because the contributions involved local, non-competitive races–and were given for personal rather than political reasons–I mistakenly believed I did not need approval from MSNBC. I also apologize for that oversight,” Scarborough reportedly said.

Politico noted that Scarborough said he “agreed with Phil’s immediate demand of a two-day suspension without pay.”

MSNBC’s president Phil Griffin said in a statement posted on NPR’s website here that Scarborough contributed $4,000 to political campaigns between 2004 and 2008.  Griffin said:

“Since he did not seek or receive prior approval for these contributions, Joe understands that I will be suspending him for violating our policy. He will be immediately suspended for two days without pay and will return to the air on Wednesday, November 24th. As Joe recognizes, it is critical that we enforce our standards and policies,” Griffin stated.

ABC News noted that Scarborough’s most recent column for Politico “was published three days ago.”