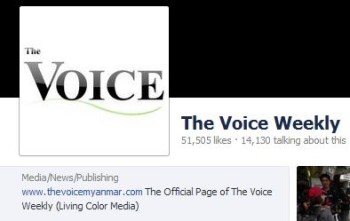 Even though the Myanmar government announced last year it was ending prior censorship at 178 of its 358 media outlets and has plans for more media freedom, several media outlets have been suspended or placed in court this summer.

Most recently, Myanmar magazines Voice Weekly and Envoy  have been “suspended…indefinitely” by the government’s Press Scrutiny Board but “the authorities did not explain the reasons for the ban,” the Associated Press reported.  Mizzima noted that Voice Weekly’s editor Kyaw Min Swe posted on Facebook the suggestion that the ban was because of “two front page stories” — “One of them was about the cabinet reshuffle and the other was news about a cartoon exhibition with photos of censored cartoons and censor board members inspecting the exhibition.”

The AP added that Voice Weekly — which “has been suspended six times” according to Mizzima —  is currently being sued for “a story alleging irregularities in several government ministries’ accounts.”  We wrote in May about that libel lawsuit, filed by Myanmar’s Mines Ministry, because a court ruled the magazine didn’t have to ID the article’s author.  As the AP noted at the time, “publications still follow their old policy of writing anonymously on sensitive subjects.”

Committee to Protect Journalists added that two other Myanmar news outlets, Venus and Yangon Times, were recently “warned…that their licenses could be revoked.”

“About 60 journalists” in Myanmar protested and started a petition against censorship August 4, according to the Associated Press.

We have written to the Voice Weekly for comment and will update with any response.