Mystery of the upside down American White Flag at Brooklyn Bridge

Mystery of the upside down White American Flag at Brooklyn Bridge 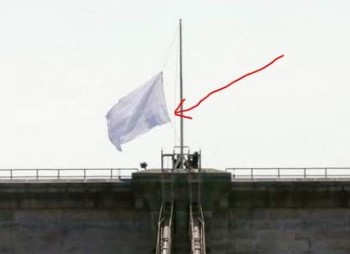 The American flag above the Brooklyn Bridge was bleached white. When it was being lowered, the flag turned upside down. (Credit: AP, screenshot, red pen added)

Major news outlets have been speculating about reasons for the bleached white American flags atop the Brooklyn Bridge, but in at least one image, one of the flags is upside down, as shown above.

iMediaEthics learned from a source at the New York Police Department’s Emergency Service Unit (ESU) that, in fact, both flags were originally upright. The ESU acted to take down the bleached flags. However, during the time when police lowered the flags, a rope allowed one of the flags to turn upside down. (We do not want to burn the source at the ESU, as he was not authorized to talk to the media.)

A representative of the NYPD Deputy Commissioner’s Public Information Office confirmed with iMediaEthics last night that both flags were originally flying right side up.

At least one reader in news articles about the bleached Brooklyn Bridge American flags mentioned the symbolic significance of the flags being upside down.

The U.S. Code says that when the flag is upside down it’s a sign of “dire distress.” The code reads, “The flag should never be displayed with the union down, except as a signal of dire distress in instances of extreme danger to life or property.”

That caption is also incorrect because the flags weren’t replaced with white banners but in fact with bleached white American flags.

iMediaEthics has asked the AP if it will correct the captions.

Mystery of the upside down White American Flag at Brooklyn Bridge