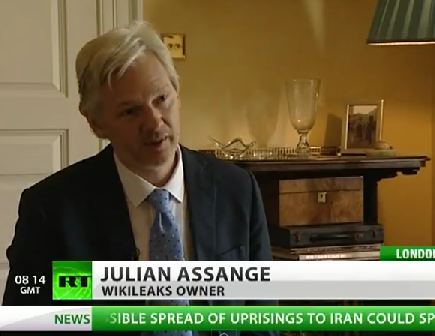 Julian Assange, pictured above, has been accused of rape and sexual molestation in the case of two Swedish women. (Credit: YouTube, "Russia Today")

Despite being alleged victims of rape or sexual molestation, the women behind the charges against Julian Assange have been publicly named and shamed in the mainstream media and blogosphere. This is in violation of all media ethics, which state that alleged victims’ names should be kept confidential.

Assange has maintained that he is innocent of the alleged sex crimes and has indicated he believes the claims “are driven by ulterior motives.”

Ordinarily, the names of alleged victims’ of serious sexual crimes are withheld out of privacy and respect.  However, the name and identifying information of at least one of the victims has been published by more than one news website.

Yahoo News’ Jon Pompeo questioned if their names should be published by the media.  Pompeo noted that Washington City Paper, a “D.C., alt-weekly,” unpublished a blogpost Dec. 22 that named the women accusing Assange. The blog post’s author, Moe Tkacik, reportedly explained her decision to name the alleged victims to Pompeo.

Tkacik said she identified the women by name “to keep their stories straight.”

“It just seemed like the most accurate and nontortured way of conveying their stories,” Tkacik is quoted as saying.  “Since I had been seeing [their names and faces] on Twitter feeds and all over the Internet, I didn’t have a second thought about publishing them.”

According to Pompeo, Tkacik is leaving Washington City Paper now, but will be a contributing writer.  However, she reportedly isn’t leaving because of the Assange post, which is back online but now featuring an editor’s note, Pompeo noted.

The editor’s note states that

“This post was originally published late last night, without an edit by anyone else at Washington City Paper.  Because of the subject matter, we unpublished it so we could review it.  The post originally named the women who Julian Assange is accused of raping.  Their names have been deleted.  City Paper does not have a formal, blanket policy on whether to name victims of alleged sexual assaults, but in this case, it was inappropriate, and editors should have been consulted before the post was published.  An update responding to criticism of publishing the names has also been deleted.

“Otherwise, this post has not been edited further, since it was already published, and copies of the original are available on the Internet.”

Many news outlets have been referring to the women involved in the charges as “Ms. A,”  “Ms. W” and so forth.

As The Guardian noted, the women accusing Assange have become “key players in a very ugly reputational slinging match.”

“Named in court only as Miss A and Miss W, their identities have nonetheless been circulating widely online since very soon after the attacks. And with Assange’s arrest, parts of the internet have declared open season on the two women, vowing to enlist an army of tech-savvy research assistants skilled in squirreling out information that others might wish to keep hidden — described with ill-disguised glee today by one blogger as ‘the First World Infowar.'”

The women’s lawyer, Claes Borgström, has commented that the two women were “the victims of a crime, but they are looked upon as the perpetrators and that is very unfortunate.”

Borgström further said that it’s “Very, very, unfair” that the two women have been accused of working under a conspiracy against Assange. “There is nothing wrong with their reputation and they have done nothing wrong in going to the police,” he is quoted as saying.  “What they are going through is unfair and absurd.”

The Guardian in a Dec. 17 article reported that it was shown the “full details of the allegations” — without redactions and including interviews.  See here.  “Stephens has repeatedly complained that Assange has not been allowed to see the full allegations against him, but it is understood his Swedish defense team have copies of all the documents seen by The Guardian. ”

The New York Times reported Dec. 18 that the “68-page confidential Swedish police report” had been leaked.  The report details “events over a four-day period in August when” Assange allegedly had sexual relationships with the two women.

According to the Times, The Guardian “broke the news of the report” and “quoted extensively from what it said was an unredacted copy.”

The Independent reported that Vaughn Smith, president of the Frontline Club, criticized The Guardian for publishing a report about the charges.  Under conditions of bail, Assange is staying with Smith in his house outside of London.  In the weeks before turning himself into police, Assange was staying at the Frontline Club, a journalists’ club.

Smith called The Guardian’s report “an attack by somebody who he’d hope not to receive it from.”  He stated that he wasn’t “going to criticize” either the journalist behind the article (Nick Davies) or The Guardian for “any wrongdoing.”  But, he didn’t think it was newsworthy. Smith is quoted as saying:

“I don’t think it delivers any new revelations. I’m sad to read it. The article was critical and I wondered to what extent The Guardian maintains a level of criticism politically to keep off the flak of publishing the leaks. I wonder how much of this is politics. It hasn’t made me think that Julian is guilty but it makes me think, perhaps, newspapers feel the need to put in criticism.”

The Daily Mail also detailed the events that reportedly led to the sex charges.  “Though heavily redacted, with details of the sex allegations blacked out, they make uncomfortable reading,” The Daily Mail wrote, going on to detail  that Assange flew to Stockholm Aug. 11.

Woman A, described as working “for the Christian branch” of the Social Democratic Party and an “attractive twenty-something” reportedly let Assange stay with her in her apartment.  Assange reportedly met the other woman, “Woman B”, the next day.  Woman B is described as “another pretty blonde, also in her 20s, but younger than Woman A.”

Crikey named one of the alleged victims and published identifying details including where she is reportedly located and her Twitter account.   Business Insider suggested readers “follow” that alleged victim on Twitter and translated one of her tweets. StinkyJournalism notes her tweets are now protected and she has no followers and isn’t following anyone (therefore, she likely shut down her account after the media pointed readers to it.)

An Aug. 23 post by Gawker not only named her, but offered details about her employment, her phone number, work address and e-mail and picture.  Gawker noted that she “locked her WordPress blog” as well as closing and privatizing her Twitter.

How the Guardian decides to call an attack 'terrorism'
UK Coronavirus Deaths, Language Ban, Deaths outside of hospital, and COVID-19 Photo Caption fail...