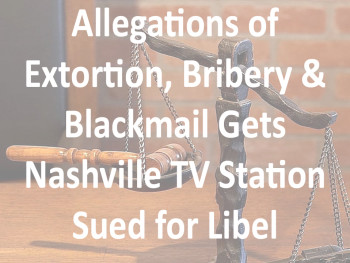 A Tennessee District Attorney General, Glenn Funk, is suing Nashville’s NewsChannel 5 WTVF and its reporter Phil Williams for libel over a story that he calls “patently false,” the Nashville Scene reported.

Lyn Plantinga, the Vice President and General Manager for WTVF told iMediaEthics by e-mail: “NewsChannel 5 stands by our story, but I cannot comment specifically on any pending litigation.”

“NewsChannel 5 Investigates has uncovered even more salacious allegations surrounding that case — allegations of extortion, possible bribery, even blackmail. Those allegations raise questions about a longtime Democratic political consultant, as well as the DA himself.

“The stunning allegations emerged in sworn testimony as a result of a civil lawsuit that David Chase filed against a group of people who he believed had conspired against him.”

Funk’s lawsuit accuses the station and Williams of “defamation, civil conspiracy, and violation of the Tennessee Consumer Protection Act.”

The day the story was broadcast Funk issued a statement saying a different Assistant District Attorney “handled Mr. Chase’s case” and “decided to dismiss the charges primarily based on inconsistent statements,” a decision “approved” by Funk, but not the result of blackmail. The statement is here.

WTVF reported that a political consultant named Bill Fletcher, “according to sworn testimony in the civil case, approached David’s wealthy father, Dean Chase, with the request.” After the WTVF report, Fletcher issued a statement, which is posted on WTVF’s website, calling the claims “completely false” and “scurrilous,” and saying he “never proposed any payments of any kind to anyone regarding the criminal case.”

Funk’s lawsuit said that he “has had no contact with” Fletcher “during his tenure as District Attorney.”

“At no point has Mr. Funk solicited, been offered, or accepted any bribe, including during his tenure as District Attorney,” the lawsuit states.

The lawsuit claims the story was false and “garbled” and alleges that Phil Williams, the reporter, “had serious doubts about their truth” at the time of publication.

iMediaEthics has written to Funk’s lawyer and Williams for comment.

Back in 2011, the station was sued for defamation by a Tennessee judge, Daniel B. Eisenstein. Eisenstein claimed the station and reporter Phil Williams defamed him in retaliation because Eisenstein questioned the dismissal of parking tickets, iMediaEthics wrote at the time. An appeals court ruled in 2012 that WTVF didn’t defame the judge but sent back to the trial court two false light claims.