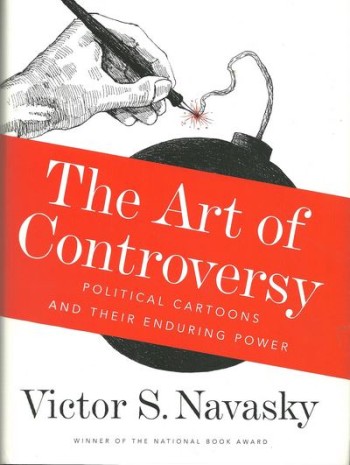 The Art of Controversy: Political Cartoons and their Enduring Power by Victor S. Navasky

You know you have stumbled upon a third rail of media ethics when a book about “the art of controversy” is published without showing the most controversial examples. Such is the case with Victor S. Navasky’s The Art of Controversy: Political Cartoons and their Enduring Power (Knopf).

Here’s the back story:

When the Danish newspaper Jyllands-Posten published a series of satiric cartoons depicting the Prophet Muhammad in 2005, the world was reminded of the power of images to arouse people, for good or ill. Millions of Muslims protested the cartoons worldwide. Embassies were shut down. More than 100 deaths and 500 injuries resulted, and the offending cartoonists went into hiding after being targeted for death. Yet many of the Muslims calling for blood never even saw the offending cartoons (and some were shown even more offensive, totally fabricated cartoons by extremist imams trying to foment unrest).

Navasky, in The Art of Controversy: Political Cartoons and their Enduring Power uses this event as one of many case studies to illustrate his various themes, one of which is that ethical issues are raised when pictures (cartoons, graphic art) are used in the news media and that these issues are often unique from those that govern the accompanying text.

As the Muhammad cartoons showed, in a world filled with political, cultural and religious controversies, a cartoon is sometimes all it takes to unleash the fury underpinning them. Or, as Navasky writes, “Cartoons and caricatures often evoke more powerful emotions than prose.”

In this specific case, Navasky tries (perhaps too) hard to be fair to the people who turned to murder in their rage, as if he himself is walking on eggshells lest he offend someone into murderous rage eight years removed from the original madness. Though he writes at length about the case of the “Danish Muhummads,” Navasky chose not to include any of the  offending cartoons in The Art of Controversy.

Splitting the difference, he included instead a cartoon by an artist for the Parisian daily newspaper Le Monde, Jean Plantureux (known professionally as Plantu), which addresses the controversy about the controversy (if that makes any sense). Entitled “I Must Not Draw Muhammad,” the cartoon sardonically but powerfully captures the essence of the issue.

Navasky ends the ethical discussion with a multiple-choice question to answer the question “Why haven’t I republished the Danish Muhammads?” The choices are:

“a. Fear of retaliation by Muslim extremists.
“b. Fear of booksellers wanting to avoid controversy.
“c. Respect for Muslim sensibilities and desire to avoid needless provocation.
“d. The cartoons are available for all to see on the Internet, only a Google away.
“e. Plantu’s cartoon is better.
“f. All of the above.”

Guess what Navasky says is the correct answer.

Perhaps there should have been another choice: g. none of the above; I am just pulling my punches.

Navasky, the former editor of The Nation and now director of the Delacorte Center for Magazine Journalism at Columbia University Graduate School of Journalism, is not alone in this regard, however it may be justified. Indeed, while reporting this genuinely newsworthy story at the time that it broke, the media in the United States and around Europe almost unanimously avoided reproducing any of the offending cartoons. It was a crazy situation.

Millions of people were up in arms about cartoons that no one was allowed to see, either because of religious prohibitions or editorial timidity.

At the time, everyone in the media seemed to be running as quickly as possible for the ethical high ground, or at least the appearance of it. The New York Times, for example, wrote, defending its decision not to run any, even the least offending, cartoons: “That seems a reasonable choice for news organizations that usually refrain from gratuitous assaults on religious symbols, especially since the cartoons are so easy to describe in words.”

This seemed to turn the old journalistic saw on its head: A thousand words were suddenly worth one cartoon.

This is just one example that Navasky details in his book, which covers, more or less, the history and ethics of controversial art dating back to the paintings of animals on cave walls. Among the cartoonists whose work are discussed and reproduced are Thomas Nast, James Gillray, Kathe Kollwitz, George Grosz, Daumier, Goya, David Low, Art Young, William Hogarth, Durer and even Leonardo da Vinci.

Navasky offers an even better, and more subtle, example than the “Danish Muhammads” to open his book. In 1984, he decided to run “Screwing the World,” a controversial cartoon by David Levine, on the cover of an issue of The Nation. The cartoon, depicting Henry Kissinger having what appears to be less than consensual sex with Mother Earth, was a critique of the devastating consequences of Kissinger’s “realpolitik” foreign policy.

While the cartoon no doubt upset the Kissinger household, it also surprisingly (at least to Navasky) fomented mutinous anger among the staff of the liberal Nation. A petition was circulated among the staff to prevent the Levine cartoon from being used, signed by 25 people in the office (Navasky was also surprised by this number; he thought there were only 23 people on the staff!).

Even the preternaturally button-pushing Nation journalist Christopher Hitchens (who would go on to write a scathing book about Kissinger and do a veritable hit job on Mother Teresa) raised objections to Navasky’s justification for running the Levine cartoon: “Although I took the staff concern seriously, there would be no vote at the end, because you can’t, or at least shouldn’t, decide a question of aesthetics by majority vote,” writes Navasky. “I thought that a decision not to use it would have about it the whiff of censorship, fairly or not.”

Levine’s cartoon ran on the cover of The Nation and produced no lawsuits or riots in the streets and was ultimately included on the cover of a catalogue for an exhibit of political cartooning at Harvard University.

But here’s a curious twist to the still ongoing controversy over the Danish Muhammad cartoons: While Navasky does not include reproductions of any of the offending cartoons in his new book, he prominently includes a reproduction of Levine’s “Screwing the World.” It is, in fact, the very first cartoon a reader comes across in the book’s introduction. On its face, this seems to touch an ethical third rail: why one, and not the other?

Navasky returns to the “Danish Muhammads” in a later chapter where he offers an account of why he still hesitates before considering showing them. His quandary, it turns out, is small potatoes compared to what happened at Yale University Press, which published a book in 2009 called The Cartoons That Shook the World by Jytte Klausen, a respected political science professor at Brandeis University. The book was a serious, scholarly study of the controversy, its ethical ramifications and the history of suppression of visual images.

The fear of “violent retaliation and intimidation” was so strong, however, that Yale Press removed all images of Muhammad from the book, as well as all of the Muhammad cartoons. In other words, a book about visual representations of Muhammad and about the 2005 Muhammad cartoons ended up containing neither.

The takeaway from this, though Navasky does not explicitly say it, is that hysteria is an enemy to both art and journalism—the prior restraint, the staying of the hand for fear of upsetting people, the pulling of punches. What is the point of being a political cartoonist if you can’t throw a punch? After all is said and done, the pen (and the paintbrush) is, and always must be, mightier than the sword.

One final note: Navasky’s book is about art, not photography. He writes, “Photographs are also images and have their own power, although people don’t blame photographers for their pictures the way they blame cartoonists for their cartoons.”

iMediaEthics would beg to differ with that assessment, at least in the case of the subway death photograph that ran on the front of the New York Post last December. As we have described in detail, a freelance photographer for the Post, R. Umar Abbasi, happened to be present when a man named Ki-Suck Han was, during an argument, shoved onto the subway tracks at a Times Square area station. There was a firestorm of controversy and condemnation of the photographer who snapped the shocking image of a man seconds from his death when the oncoming train crushes him.

Many ethical questions were raised by the use of Abbasi’s horrifying photographs. And among them were those that blamed the photographer for his pictures. Or, rather, for his taking of the pictures and exploiting the tragedy rather than trying to come to the aid of Mr. Han.

Navasky might say he was faced with a similar choice and that he made the correct one: Not running the cartoons, which could possibly have put lives at risk, was the equivalent of putting down the camera and going to the aid of Mr. Han.

But was it? What do you think?

The Art of Controversy: Political Cartoons and their Enduring Power by Victor S. Navasky, Alfred A. Knopf, 232 pages, $27.95.

Alan Bisbort is a copy editor at iMediaEthics and the author, most recently, of Media Scandals (Greenwood Press) and Beatniks: A Guide to American Subculture (Greenwood/ABC-Clio). He is a regular contributor to Literary Kicks and the Hartford Advocate.