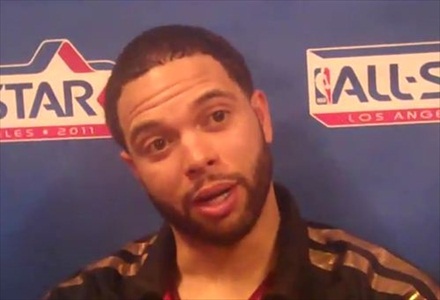 Deron Williams asked sports reporter Ken Berger who his anonymous sources were for a story about him. (Credit: YouTube, "rozzru20")

Deron Williams, a point guard for the NBA’s New Jersey Nets, confronted a sports reporter about his anonymously sourced reports that Williams would go to the New York Knicks team, Sportsgrid reported.

The reporter, Ken Berger for CBSSports.com, wrote Feb, 19 that

“A person with knowledge of the conversations told CBSSports.com on Saturday that Jazz point guard Deron Williams began informing close associates after last season that if Stoudemire wound up in New York, Williams would follow him there as a free agent in 2012.”  (Stoudemire joined the New York Knicks in July 2010.)

At a Feb. 22 press conference, a reporter asked Williams about the claims that he wished to go to New York.  Williams asked who said so and, once he was told, responded that he’s “never met Ken Berger in my life.”

But, Berger was at that press conference, so Williams directly asked him where his anonymously-sourced claims came from:

Williams: “Exactly! So it’s not credible.”

While apparently there “was no finger-pointing, no yelling,” according to Sportsgrid, it was “a cautionary tale for basketball writers who want to be the first to report on a player’s free agent intentions: if you use an unnamed source that talks about a player, you might actually be asked about it.”

Williams was traded from the Utah Jazz to the New Jersey Nets Feb. 23.

Business Insider used the incident as a word to the wise for sports fans, calling the confrontation “another good reminder to basketball junkies not to believe every rumor they hear. In many cases – and this appears to be one of them – reporters are simply the final participant in a long game of telephone.”