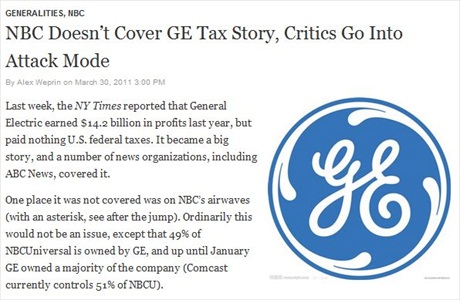 NBC has been criticized for not reporting on one of its owners, General Electric. (Credit: MediaBistro)

Last week, mainstream news outlets like ABC News and Fox News reported on the New York Times’ article about General Electric Co. not paying any federal taxes in 2010.  NBC News, which is partly owned by GE, did not report on this major news story, leaving the Washington Post to wonder if the network was covering for its parent company.

General Electric owns 49% of NBCUniversal, and up until January GE owned a majority of the company (Comcast currently controls 51% of NBCU), Media Bistro noted.

The New York Times broke the story that GE “earned $14.2 billion in worldwide profits,” $5.1 billion of which was in the United States.  GE has responded to the Times’ report and “called the allegations, ‘inaccurate,’ and ‘grossly oversimplified,’ and said that it did pay almost $2.7 billion in cash income taxes in 2010, and in excess of $1 billion in payroll, state and local sales and property taxes,” the Takeaway reported.

NBC News defended its decision to not cover the story, calling it “a straightforward editorial decision, the kind we make daily around here,” the Post reported.

But, Comedy Central’s The Daily Show questioned that defense, commenting that NBC’s Nightly News found the addition of “OMG” and “muffin top” to the Oxford English Dictionary newsworthy enough, “but didn’t bother with the GE story.”

The Post noted that MSNBC’s Rachel Maddow did “briefly” comment on the story, MSNBC’s Lawrence O’Donnell “was sharply critical,” and CNBC’s Larry Kudlow commented on it.

Media watchdog FAIR’s director, Peter Hart, told the Post that there have been a “series of GE-related stories that NBC’s news division has underplayed over the years, from safety issues in GE-designed nuclear power plants to the dumping of hazardous chemicals into New York’s Hudson River by GE-owned plants.”

But, according to Hart, NBC isn’t alone in avoiding reporting badly on its parent company.  “All three networks’ news divisions, according to Hart, have become reliable sources of publicity for their parents’ other corporate interests, doing news stories about upcoming sporting events or new TV shows carried on their own networks,” the Post reported.

“It’s very curious,” Hart is quoted as saying. “Imagine if a different company were involved. If you changed the name to Citibank or Goldman Sachs, would NBC be interested in the story then? I suspect they would be.”

The Post noted that it has also been criticized for lack of disclosure in its parent company’s properties.  In November, the Post’s then-public editor Andy Alexander called on the newspaper to “beef up” its reporting on higher education program Kaplan.  Kaplan and the Post are both owned by the Washington Post Co.