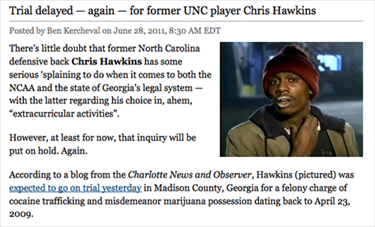 An NBC Sports blog ran a photo of crack-addicted TV character Tyrone Biggums next to its post on a football player. (Credit: Card Chronicle, screenshot)

NBC Sports’ story reported on Hawkins’  trial for “a felony charge of cocaine trafficking and misdemeanor marijuana possession dating back to April of 2009,” according to Card Chronicle.  Instead of including a photo of Hawkins, NBC Sports posted a photo of Tyrone Biggums, a character from Chappelle’s Show. Card Chronicle saved a screenshot of the story here.

The picture of Biggums is no longer on the site and has since been replaced with a photo of a helmet, Card Chronicle noted.

StinkyJournalism has written to NBC Sports’ College Football Talk asking for comment and if the site will post a correction. We will update with any response.